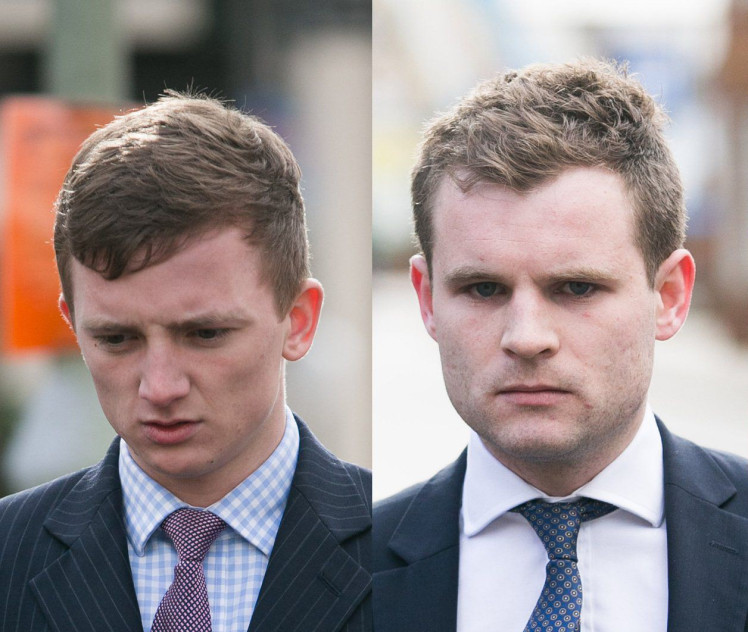 Four students accused of raping a woman at a summer ball at Britain’s most elite agricultural college walked free from court yesterday as the case was dropped.

All charges against Mahon, Foster and Martin were dropped but Duff, of Swindon, Wilts., still faces one charge of possession of extreme pornography.

Duff, 22, a polo player whose mother Melanie was a Tory councillor for Swindon Borough Council and Mayor of Highworth, had faced three counts of rape.

He was also accused of a further sexual assault involving the same woman, which allegedly took place in October 2013.

His friend Mahon, 23, of Cirencester, Glos., was charged with three counts of rape and two of assault by penetration.

Foster, 22, of Colchester, Essex, had faced one count of rape and two of assault by penetration and Martin, 20, of Chipping Norton, Oxon., was charged with one rape.

The alleged offences against a female student were said to have taken place after the 2014 Mad Hatters May Ball at the RAU where there was unlimited beer, wine and cider.

All four, who had been on bail, walked free from Gloucester Crown Court where their trial had been due to start last month.

It was delayed and adjourned for legal argument when the case “ran into an iceberg” on March 30 and the jury was discharged.

Proceedings were due to resume tomorrow (Tues) but all charges against three of the men were dropped by the Crown Prosecution Service.

The defendants were told the news on Friday and the court was informed of the decision yesterday morning (Mon) as there was no longer a reasonable likelihood of prosecution.

Judge Jamie Tabor QC said: “There were not guilty pleas made and now there is a not guilty verdict.”

He formally discharged Duff, Mahon, Foster and Martin but warned them to be careful of their actions on social media.

He also told their counsel to tell the men: “Remind them of the very careful path they tread.”

Well-dressed friends and relatives of the four couldn’t contain their delight from the public gallery.

Duff wiped away a tear as he left the court and said: “It’s been a long two years.”

The rest of the defendants greeted the news with blank expressions.

Defending barrister Edward Henry accused the police of dragging out the prosecution.

He told the court: “The police have shown one long execution in confirmation bias.”

He accused officers of “air brushing” and “cherry picking” evidence and said there will need to be a review.

He added: “We need to know the answers to some questions. Why this should have gone on for so long as it has?

“There was no explanation as to why that decision has been reached. Why it took 13 months to decide to charge these defendants in the first place?”

Judge Tabor said he was not there to criticise the police at this stage and said the defence should save that for an application if necessary.

Around 1,200 students attend the RAU, which became the first agricultural college in the English-speaking world in 1845 when it was granted a Royal Charter by Queen Victoria.

Her descendants have always been Patrons of the institution which stands in a beautiful 25-acre campus on the edge of Cirencester, Glos.

Since 2008, it has seen a 49 per cent rise in applications and is ranked top in the UK for investing in campus facilities.