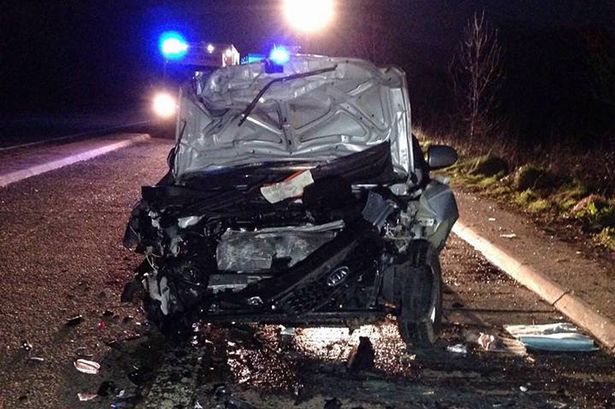 A drink-driver miraculously walked away from this wreckage after smashing his car into a parked vehicle as he guzzled cider on the WRONG side of a dual carriageway.

Peter Kellett, 62, ploughed into a Land Rover in a layby after driving into oncoming traffic on the main A361 North Devon link road with a can in his hand.

The second car was also badly damaged and the driver sitting inside suffered a head injury, concussion, whiplash and soft tissue damage.

Kellett climbed from his car and was seen tossing cans away before police arrived.

They arrested him for drink-driving and he told them he had bought four cans of cider before his journey from his home in Staffordshire.

He said he was planning to drink them once he got to Ilfracombe in North Devon but drank them on the way.

He said he pulled into the layby after realising he was drunk.

Kellett admitted drink-driving and escaped jail with a four-year ban.

Prosecuting, Philip Sewell told North Devon magistrates: “He went to pull in to a layby and doesn’t recall seeing another parked vehicle.

“He said he had been drinking the day before and while drinking in his car and realised he would be topping up.”

He added: “There were several witnesses who saw the manner of driving. After the collision he was seen in the layby throwing cans from his car.”

The court heard Kellett had previously been disqualified from driving for 28 months in April 2012 for drink-driving.

“Occasionally, due to emotional distresses he experiences mainly due to the loss of his son, he drinks more than he should,” said Mr Hook.

“He accepts he shouldn’t have drunk anything while in the car.”

Kellett spoke in court to apologise to the man in the Land Rover, who was present at the hearing.

He said: “I would like to apologise to the gentleman for what I have done. I know that doesn’t cut any ice.”

Presiding magistrate Michael Buckley said: “We view this offence in the most serious way, exacerbated by the fact you were drinking while driving along.”

Kellett was also given a community order with 100 hours’ unpaid work and ordered to pay £85 costs.