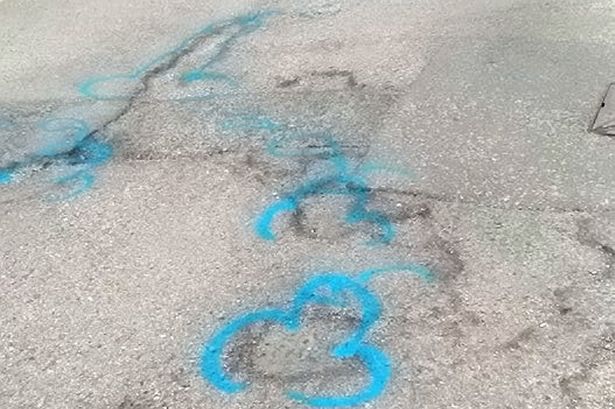 A cocky graffiti artist is forcing his local council to fix potholes by spray-painting around them – with PENISES.

Nicknamed Wanksy by residents, the unknown artist has painted multiple penises around a series of potholes in an effort to prompt the local council to fix them.

Whilst the painted potholes, in Dover, Kent, are near a primary school, residents have supported the artist and even suggested other potholes that should be targeted.

Stevo Marrin said: “That is The Linces near Green Park School and just one of the many roads in Dover that need sorting.”

Adele Napier added: “It’s rather funny but a bit of a d**k move doing outside a school.”

Kent County Council claim the road was due to be fixed, but painting around them will not make them fill the holes in more vigorously.

A Kent County Council spokesman said: “Residents are asked to report potholes and other faults online, where details can be easily uploaded and locations pinpointed on an interactive map.

“Providing this information has helped speed up the rate of repairs.

“In this instance, the issue was reported to us before obscenities were spray painted over them and the works are due to be carried out on Friday, weather permitting.

“Spray-painting around the potholes will not get them fixed any quicker.

“We would urge this person to stop defacing the roads and anyone who sees this sort of criminal damage being carried out should report it to the police.”