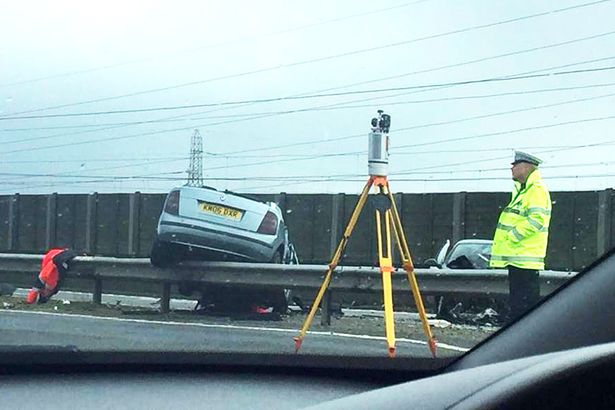 A man has been arrested on suspicion of causing a horror crash while driving in the wrong direction on a motorway.

A woman was taken to hospital with severe injuries following the smash, which happened on the M20 in Kent just after midday yesterday (Thurs).

Police were called to reports of a black Seat Leon travelling the wrong way on the London-bound carriageway.

It then collided with another car, causing serious injuries to a passenger.

The driver allegedly seen travelling against the flow of traffic in the outside lane suffered minor injuries.

A man was arrested on suspicion of causing serious injury by dangerous driving.

PC Simon Masterson from the serious collision investigation unit said: “There will be a number of people who would have seen this incident, and potentially might have video footage from dash cams.

“I would appeal for anyone who has any information that they think could be relevant to call us as soon as possible.”

One driver who was caught up in the incident, described the moment he saw a car coming straight at him the wrong way.

The man, known only as Paul, was driving to Ashford rail station in lane three when he saw a car coming straight at him after a bend.

He said: “I kind of had to do a double take. I thought I was seeing things. Luckily the car he was overtaking braked.”

Three ambulances were sent to the scene, as well as air ambulance crews, police and the fire brigade.

Ambulance spokesman Rich Airey said one woman was cut free after being trapped in the vehicle “for some time”.

She was then taken to hospital with multiple injuries, but in a stable condition.

Two others were taken to the William Harvey Hospital in Ashford, one with a possible broken leg and the other with a hip injury.

The motorway was closed in both directions and was reopened by around 5pm.