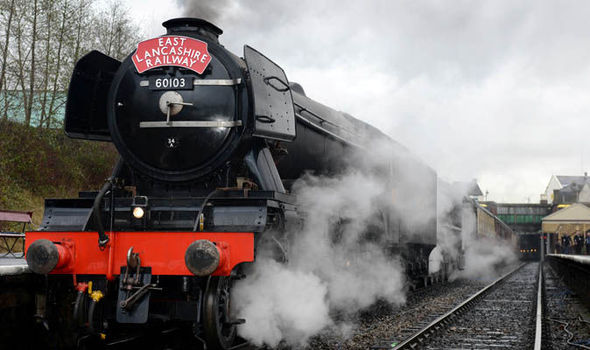 Plans for the Flying Scotsman to travel through Cambridgeshire have been scrapped over fears people will once again risk their lives trying to see the engine up close.

Around 60 people stormed the tracks when the legendary locomotive steamed through St Neots, Cambs., during its inaugral trip from London Kings Cross to York earlier this year.

Its journey was halted for about 15 minutes, costing hundreds of thousands of pounds due to knock-on delays for other trains.

Now, event organisers Steam Dreams has been forced to cancel the planned trip from London Victoria to Ely on May 25.

Tickets for the trip – and the Flying Scotsman cream tea trip from Ely, Cambs., to Norwich which was due to take place on the same day – sold out months ago.

Although the Flying Scotsman will continue to run on other routes, organisers say there are too many stretches of the track between Ely and Norwich which could allow spectators to get too close.

Marcus Robertson, chairman of event organisers Steam Dream, said he was devastated for enthusiasts but was adamant it was the right thing to do.

He said: “Everyone involved with this does it because it’s fun and for the love of it.

“But we’ve also got to preserve our British heritage, and we do that by making sure we protect the good reputation of our steam engines.

“Although Network Rail have not said we can’t do the journey between Norwich and Ely, we have decided to do the sensible thing.

“At the moment the threat to life and limb is too much.”

Passengers who paid almost £180 for a ticket have now been offered a refund or first refusal on other available trips.