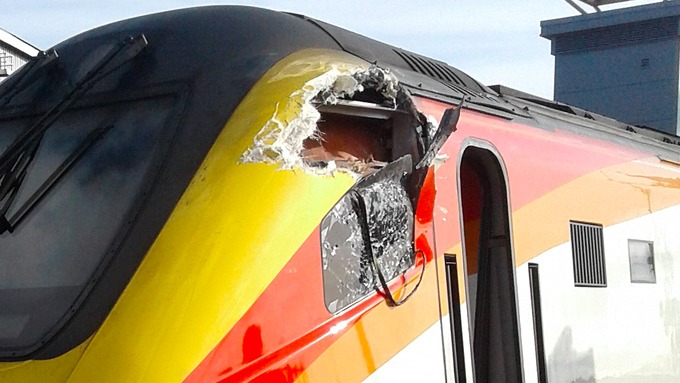 Half of the A614 train bridge near Howden, East Yorks., collapsed into a ditch unexpectedly today (Thurs) and has been closed to traffic because of the gaping hole which was surrounded by rubble and water spraying out of a broken pipe.

Yorkshire Water contractors were at the scene throughout the day to fix a cracked water main and a temporary walk way was also constructed – but trains were still able to travel along the line.

A Network Rail spokesman said: “Overnight a structure which is owned by Network Rail suffered a partial collapse which has resulted in the closure of the A614 near Howden.

“The cause of the collapse is still under investigation, and specialist structural engineers as well as engineers from Yorkshire Water and the East Riding of Yorkshire are currently on site assessing the damage and making the area safe.

“Once a full assessment has been made, plans can be made to carry out the repairs, but safety is our absolute priority at this time and we advise people to avoid the area as the road will be closed for the foreseeable future.”

It is a decade since the same bridge collapsed in 2006 – causing months of misery for motorists.