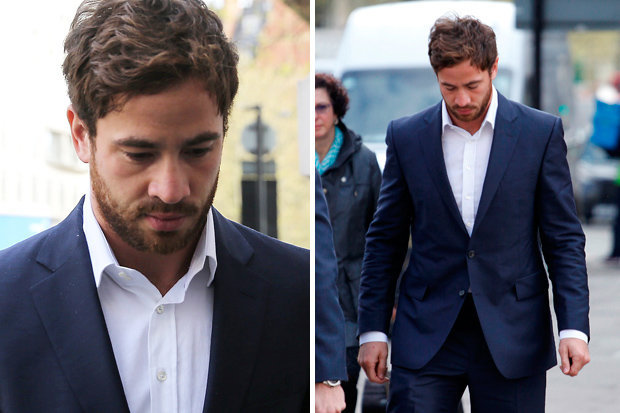 Rugby star Danny Cipriani feared his England career would be “threatened by the fact he had been arrested” for drink driving, a court heard.

Cirpiani, 28, is on trial at Westminster Magistrates Court charged with drink driving after crashing his black Mercedes in west London just after 5.15am on June 1st last year.

He allegedly had 67 microgrammes of alcohol per 100ml of breath, which is nearly double the legal limit for England and Wales, when he hit the Toyota Prius cab.

The court heard today from Police Sergeant Marc Pullen who was the on duty custody Sergeant at Hammersmith Police Station where Cipriani was taken after failing a roadside breathalyser test.

The court heard there had been a two hour delay between the arrest and the two breathalyser tests at the police station.

PS Pullen told the court he recognised Cipriani, having watched him play for an England XV against Barbarians at Twickenham the day before, where he was crowned man of the match.

He said: “I mentioned to him he played well in the game the day before.”

Asked why he did this, he said: “It was just to put him at ease. He was quite distressed. I said it might go under (the breath test), ‘let’s just get this out of the way.’

“His face was down. He was clearly upset that he had been arrested.”

Sgt Pullen added: “He mentioned his situation with the current England rugby team was going to be threatened by the fact he had been arrested.”

He was also asked why there had been a delay to processing the rugby star, to which Sgt Pullen said: “There was no delay at all.

“The booking in process takes time, and I wanted to make sure he understands what was being said.”

Philip Lucas, for the defence, asked if Pullen told Cipriani “he would make sure things go smoothly” and had asked the defendant to be taken outside “to calm him down a bit or let the dust settle”.

PS Pullen said: “I didn’t say that or anything like that at all.”

He confirmed he had talked to the player about his chances with the England team, referring to former England coach Stuart Lancaster having a “strict regime.”

Earlier the court heard from the arresting officer PC Shane Elsworth who told the court he examined Cipriani’s vehicle at the scene of the crash.

He said: “There were marks down the left of hand side of the road.

“The vehicle collided with the kerb and caused two flat tires on the left hand side.”

When asked about how Cipriani looked and said was “slurring his words slightly”.

The PC said: “I remember him saying it was the driver of the taxi that caused him to have the accident.

“The driver of the taxi drove out of his lane causing him to swerve.”

Under cross examination he was asked if there had been a delay in the processing of Cipriani at the police station and about custody sergeant Pullen recognising the defendant.

Mr Lucas for the defence, said: “The custody sergeant then said he would make things go as smoothly as possible for him in the police station.”

PC Elsworth said: “I remember the conversation taking place and rugby was the topic, but I can’t remember the exact details.”