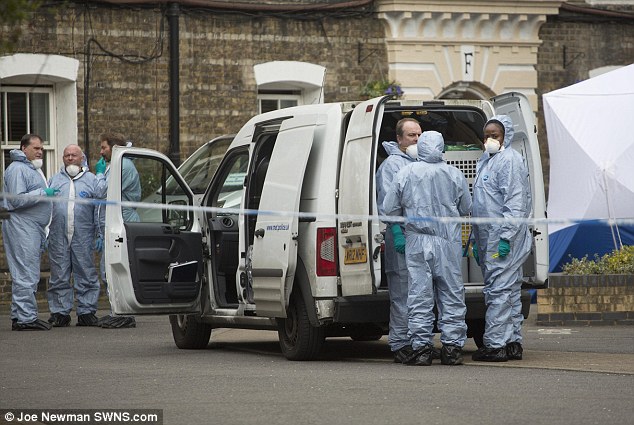 A man was seen at the front door to the flat where humans remains were found on the afternoon PC Gordon Semple went missing, police said.

Scotland Yard detectives investigating the murder of their colleague said the unidentified man was seen there for about a minute but did not go inside.

Today they urged this man to come forward as they confirmed the remains are those of the Westminster policeman but could not say how he died.

The officer had attended a meeting at the five-star Shangri La hotel in The Shard skyscraper leaving at around 12.30pm.

CCTV cameras then picked him up at 3pm in nearby Great Guildford Street, close to the Peabody Estate where his remains were found.

Scotland Yard said: “Detectives are now satisfied that the human remains found at the address in Southwark Street, Southwark are those of Gordon Semple, who was reported missing on 1 April.

“A post mortem examination was carried out on 8 April and cause of death is at this stage unascertained.

“A further post mortem has been scheduled for Wednesday, 13 April. However, detectives are treating Gordon’s death as murder.”

Detective Chief Inspector Cliff Lyons, from the Homicide and Major Crime Command, who is leading the investigation into Gordon’s murder, said: “I am keen to trace a man who went to Brizzi’s flat in Southwark Street on Friday, 1 April at about 3pm.

He was there for only one minute, and did not go inside, but it is incredibly important that we speak to him.

“I will treat what you tell me with sensitivity and confidentiality – please get in touch with us I need to talk to you.”

Italian Stefano Brizzi, 49 of Peabody Trust Estate, Southwark has been remanded in custody and is next due to appear at the Old Bailey on Wednesday.