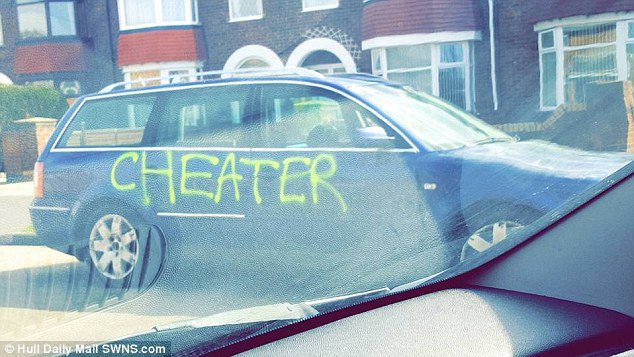 A spurned lover appears to have taken revenge publicly – by spray-painting LIAR and CHEAT all over their adulterous partner’s car.

The blue motor, believed to be a Volkswagen Passat estate, was emblazoned with fluorescent yellow insulting messages across its windscreen, all four doors and the car bonnet.

It was spotted by amused neighbours in Anlaby, Hull, East Yorks., who joked about it on Facebook, noting it had been ‘dented in’, and that someone was later seen scrubbing the comments off the bonnet.

The result was a motor resembling TV character Alan Partridge’s infamous motor after he was targeted by vandals.

On an episode of Steve Coogan’s comedy show I’m Alan Partridge, the character’s car has expletives painted onto it.