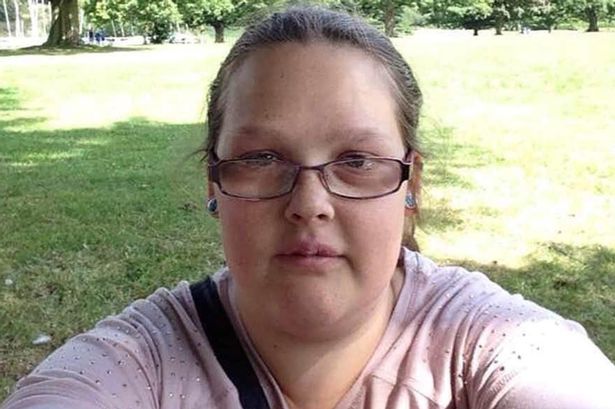 A married couple lured a friend with learning difficulties to their home and drugged and raped her before they battered her to death with a HAMMER, a court heard.

Steven Beards, 34, and his wife Julie, 35, are accused of murdering Susan Whiting, 20, before hiding her half-naked body bound by cable ties under their bed.

A court heard Susan was reported missing by her worried mum Maureen after she went to stay with the pair at their bungalow on August 17 last year.

Police found her body hidden under a divan bed wrapped in a bin bag and a shower curtain two days later at the property in Bloxwich, Walsall, West Mids.

Yesterday (Tue) the couple went on trial at Leicester Crown Court charged with rape and murder.

Julie Beards, who has learning difficulties, appeared wearing a pink fleece alongside a carer and Steven, who was in a black fleece with slicked back, greasy hair.

The court heard between them they first sedated Susan with prescription medicine Julie stole from a friend before launching their attack.

Steven tied her to a bed with cable ties and raped her before the couple fractured her head with a hammer and hid the body, jurors were told.

“They killed her after she had been drugged and raped by Steven Beards.

“At the time she was staying overnight at their home, a small bungalow.

“She was specifically asked to go by Julie Beards.

“Susan was a friend of Julie and had stayed over on other occasions, but Julie seemed to resent the fact that Susan had other friends and it seemed their relationship had cooled.

“They killed her by hitting her over the head with a blunt object, probably this hammer here, and by compressing her neck.

“We can’t say at what time the killing took place, but we know some time after 9pm on the Sunday night and before 12.30pm the next day.

“That was the time Susan’s mother turned up at their home to collect her daughter.

“When she got there she was lied to by Julie Beards. She told her Susan had left the bungalow.

“Having killed Susan they then set about hiding her body under the divan bed where eventually it was found.

“The divan bed was cut up, the fabric placed upon the floor, and Susan was placed in the bed all bound up. She was concealed.

“Steven Beards told officers he had not slept at the bungalow in the night, but returned in the morning.

“When he returned he said he saw Susan, and she left the bungalow at about 8am.

“He claims that either Susan was killed when he claimed he was out, or some mystery killer has, after she left the bungalow, caught her and taken her back to the bungalow where she spent the night.

“Having done so, they drugged, raped and killed her. The prosecution says this is nonsense.

“Julie Beards may say that she was also drugged by her husband, and that she knew nothing about the murder.

“Up until this morning both defendants’ evidence was the same. Now Julie Beards says she slept in the same bed as Susan.

“She said she got up went into the bathroom and when she comes out she finds Steven Beards having killed Susan and he’s in the process of wrapping her up.

“The prosecution doesn’t accept that. She was a willing participant in what went on from beginning to end.

“No evidence was found from the blood or her hair to show she had been drugged.

“Steven Beards’ case that he did not rape Susan is despite the presence of his sperm found inside Susan, and the chances of another person producing that sperm is one in a billion.”

Mr Evans showed the jury a diagram of the injuries to Susan, which included a fractured skull, as well as bruising to her forehead and shoulder.

Mr Evans said: “Officers searched under the bed and sadly found Susan’s body on the Tuesday.

“A black plastic bag had been placed over her head and secured with a plastic cable tie.

“She was naked from the waist down and the body had been wrapped in a shower curtain that was bound by lengths of green garden netting.

“Her wrists had been restrained by plastic cable ties that went around her wrists and interlocked with each other.”

Mr Evans said that despite Steven claiming not be attracted to Susan, she was saved as “Sexy Susan” in his phone.

Referring to how Susan was drugged, he added: “Analysis showed that a sedating hypnotic drug – zopiclone – was found in a blood sample taken from Susan’s body.

“It had been administered to her we believe in food and drink consumed at the bungalow.

“Upon searching the bungalow the police found zopiclone in a crushed up from in a plastic bag that was found on a tea tray.

“Julie Beards’s friend, Matthew Herbert, had been prescribed the drug and we say she stole it from him.

“There is evidence to suggest that she had, whilst visiting him, slipped it into his coffee and watched him fall into a deep sleep.

“She had been experimenting with the drug and knew its effects.”

The trial, which is expected to last two to three weeks, continues.