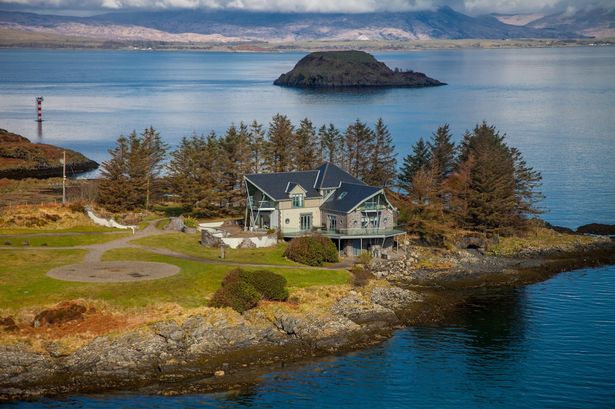 A stunning family home on its own private ISLAND went onto the market today (Fri) for less than £1 million.

The state-of-the-art three-bedroom property was built in 2014 and boasts a luxury kitchen and three en-suite bathrooms.

But its selling point is that it is the only property on the picturesque tidal island of Rudh-A-Chruidh, off the north east tip of Kerrera on Scotland’s west coast.

The tiny private island covers around four acres and has breathtaking views and is linked to the bigger isle of Kerrera by a causeway at low tide.

However, for the discernible millionaire most likely to buy Rudh-A-Chruidh, it also has the benefit of its own helipad with Glasgow Airport just 80 miles away.

Most visitors to Rudh-A-Chruidh, which is one of Scotland’s smallest inhabited islands, are likely to arrive by boat.

The current owner commissioned architect Norman Hickson to build a contemporary home which would blend into its environment but be built to an exacting standard.

Mr Hickson, who is based on the Isle of Mull, described the property as being “traditional but dynamic, with a maritime influence”.

He said: “The relationship between the building and the water was the most important consideration and I wanted the occupants to stand in the kitchen, look out of the window and feel like the building had its feet in the water.”

The house has an American beach house style with an open plan drawing room, dining area and kitchen.

The sitting room has a wood burning stove and French doors to the decked terrace, which has ocean views.

The island’s coastline is a blend of shingle beach and rugged rocks with rich grassland making it a haven for birdlife.

Porpoises, dolphins, otters and seals can sometimes be seen in the water.

Rudh-A-Chruidh is launched onto the market today (Fri), with Savills looking after the property.

Last time the island went on the market in 2010 it attracted global interest with a Scottish businessman eventually winning the bidding battle.

He paid £426,000 for it when the only property was a bungalow that previously stood there.

Andrew Perratt, head of Savills residential, said: “This is a rare opportunity to buy an exceptional, contemporary home, on its own island, in a particularly beautiful part of Scotland.

“Rudh-A-Chruidh sits proudly above Oban Bay on the west coast, with breathtaking views of the Sound of Kerrera and beyond.

“Not only are the interiors stylish, and the house and grounds beautifully designed, opportunities to enjoy sailing, fishing, the countryside and its amazing wildlife are endless.”