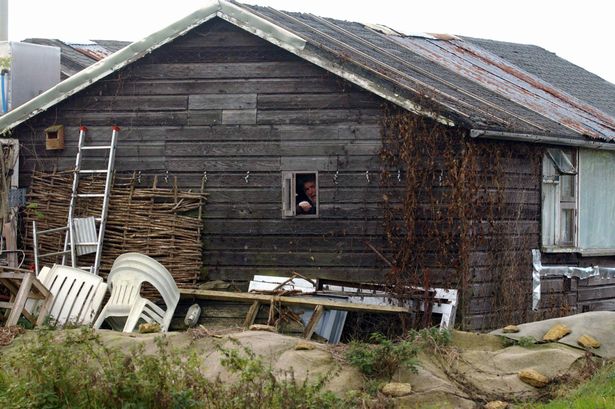 A woman who refuses to use electricity because she is ‘allergic to the modern world’ was nearly killed when her shack was burned down – by a candle.

Gillian McCarthy, 62, has lived in a ramshackle hut in the corner of a field for 20 years in a bid to live in a ‘chemically inert’ environment free from toxins.

She lives without running water and electricity and in fear of reactions to carpets, soap and even tap water – claiming a sniff of aftershave could knock her unconscious.

But the former biochemist is now homeless after three candles she used for warmth caused a blaze which razed the shack to the ground.

The former biochemist says her life was saved by the call of nature after she popped to the loo when the flames took hold.

She is now living in a ‘den’ in the woods built by her sympathetic volunteers near Wincanton, Somerset.

Gillian said: “It was my bladder that saved me. I was heading towards the bathroom when I heard a big crash and a bang.

“I managed to get to the fire extinguisher but then there really was a big whoosh and I knew I couldn’t handle it on my own.

“There was only one exit and I just had to chance it.

“My father was a fireman and without that knowledge I might not have made it out.

“I don’t know how I’m going to manage.

“I’ve lost all my photos, old papers, my clock, my commode, everything. I need a wheelchair really and I’ve lost that too.”

University graduate Gillian came into contact with hundreds of chemicals when she worked as a biochemist and agricultural merchant, and believes she was poisoned.

She was diagnosed with multiple chemical sensitivity in 1983, a condition which she claims leaves her intolerant to substances found in modern day objects.

Gillian spent years trying to battle the condition – which affects her vision and causes her pain – including an 18-month detox at an environmental illness unit in Hertfordshire.

Speaking of her condition previously, she said: “I start sounding as if I’m drunk and my legs swell up.

“If someone is wearing a lot of perfume, I can pick them up 100ft away. Aftershave can knock me unconscious.”

By 1996 she claims she had spent £280,000 on private treatment, and was forced to sell her home in Wales, and move to the wooden huts in Stoney Stoke.

The three holiday huts knocked together in the coroner of a field were supposed to be temporary, but she has been there ever since.

But the sheds were completely destroyed by a blaze on Friday (8) night.

She managed to clamber up the lane away from the inferno to wait for help.

Three fire crews fought the flames for three hours after being called by occupants of a nearby farm shortly after 10.30pm.

Ms McCarthy believes three candles she used for warmth and to heat water were the cause of the blaze.

She is now living in a “den” built by volunteers – where she celebrated her 62nd birthday on Monday – without sanitation, a bed or a phone.

She added that she also lost four days’ worth of water supplies and £500 worth of medication.

Gillian says she is now in need of volunteers to help her salvage belongings from the wreckage and to build a barrier to protect her den.

She added: “People have been so kind already and I’ve had new walking sticks fashioned for me.”

But her friend, Barbara Simmons, warned volunteers not to wear perfumes or aftershaves which might harm Ms McCarthy.

Anyone who wants to help can contact charity MCS Aware, at nicky@mcs-aware.org.