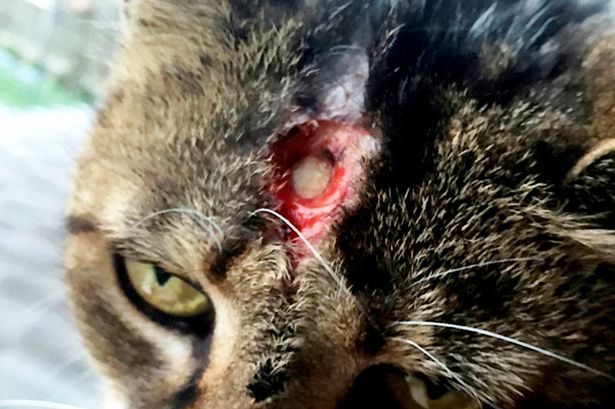 A yob who caused horrific injuries to his neighbour’s cat when he threw boiling hot water over it was caged yesterday (Thurs).

Jason Kelly, 46, launched a terrifying attack on the 16-year-old tabby, called Geri, after he caught it going to the toilet in his garden.

He previously admitted causing unnecessary suffering to the cat and was yesterday jailed for 12 weeks at Birmingham Magistrates’ Court.

The court heard Kelly threw the water over Geri on 9 October last year after he spotted it in his garden at his home in Wyver Crescent, Coventry.

RSPCA inspector Louise Labram, who investigated the incident, said: “Geri had gone missing one night, which was not like her at all.

“The next morning her owners found her in a lot of pain and distress, but it was not immediately obvious what had happened to her.

“It was only when her fur started falling out and her skin looked sore that a vet said she was suffering from burn injuries.

“Over the next few days, her injuries were getting worse and the burns started to eat away at her skin.

“Kelly said he threw the hot water on Geri because he was fed up of her going to the toilet on his property – a callous act which is completely out of proportion for the offence and caused this poor cat much pain and distress.”

The injuries have left permanent scarring to Geri’s body, including a patch on her head which has left a part of her skull exposed.

Inspector Labram said that Geri’s owners have noticed an obvious change in the cat since the incident.

She said: “Six months on, Geri is still physically damaged and is not herself. She no longer goes outside, is very clingy and follows her owner around everywhere.

“It has not only affected her physically, but it has damaged her mental wellbeing too.”