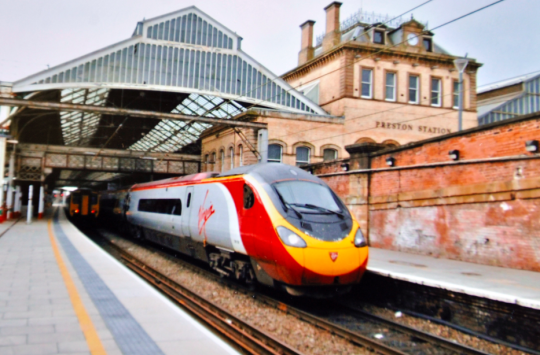 Pensioner David Brewer is so loco about trains he has travelled the equivalent to the Moon – to photograph every railway STATION in Britain.

The dad-of-two spent four years visiting the country’s 2,550 stations as a way of filling his spare time after he retired as a ticket office clerk.

Since finishing work he has clocked up more than 250,000 miles on road and rail – the equivalent distance of travelling to the Moon – to complete his epic challenge.

He even kept meticulous handwritten notes of his adventures which show his busiest year was in 2008 when he snapped 487 stations.

David also drew up tables to log where he had been and printed his photos which are kept in timetable order.

David who lives with his wife Shirley, 57, in Chorley, Lancs., said: “My father worked on the railways all his life on the controls at Preston station.

“Three or four times a year we’d get the train down to London to see relations. That probably started me off.

“As a boy I was a keen trainspotter but I wasn’t satisfied with sitting on Preston station getting a few.

“I had to go to the best engine sheds. I had to go round the country getting as many as I could.

“I set myself the challenge of visiting every station when I retired and by 2011 I had done it.

“On average I would do one trip a week and during the summer I would get a rail rover ticket so I could stay overnight or use the sleeper train.

“I could do around 25 stations in one day around busy cities but where it was more remote it took more planning and time.

“I decided to do a book and thought I can’t do one with all 2,550 stations so did it on the least used ones that people might not have been too.

“I’ve not kept a note of it but I must’ve done tens of thousands of miles. I get satisfaction from it and I suppose it is an achievement to have been to them all.”

David manages to save some money on his well-planned trips with the free travel he gets on Northern Rail as a former employee.

He also buys rover tickets which allow unlimited travel for seven or 14 days to keep costs down.

His favourite stations are the smaller remote ones like Dolau on the Heart of Wales line in Powys and Chathill in Northumberland.

David also struggled to reach some stations during his mammoth challenge including
Redcar British Steel which only has two services per day and is on private land.

He added: “I like the stations that have been well looked after.

“What I found interest is there is such a difference between the stations. Some of run down and some are looked after and their locations are very different.

“If I can pick two favourites I would go for Dolau on the Heart of Wales line and Chathill, which is north of Newcastle.

“Both are lovely stations and both are very well looked after.

“When I went to Redcar I got off the bus and walked towards the steel works but they weren’t going to let me in.

“I spoke to the gatekeeper and explained what I was doing. I had to persuade him.

“Eventually he went to an office, came back and said he’d let me in. I took my photos, waited an hour and got the only train out in the evening.”

David also had to spend £20 on a taxi to get to Shippea Hill in Cambridgeshire which has a sparse service.

He added: “There is a number of stations where I had to walk three or four miles to get there.

“Some stations only had one train calling so I would have to go to the nearest station with a regular service and then walk.

“Shippea Hill is nine miles from Ely station and there was no bus so I had to get a taxi to get there an hour before the one service that called there.

“Teesside Airport only has two trains a week on a Sunday and is a good 15 minute walk from the terminal so it isn’t suitable and isn’t really used at all.”

He completed his mammoth trek across the country’s rail network when he pulled into Manea Station in Cambridge in 2011.

He then spent years compiling his trips into a book called Britain’s Least Used Stations which he has now self-published.

It includes Teesside Airport which had just eight passengers in 2013 and Altnabreac in the Highlands in Scotland which only had 138 passengers that year.

“People say: ‘Oh, you went to such and such a place, what did you do there?’

“And I say: ‘Well, I stood on the station and took photos.’

“Occasionally I’ll walk round the town if I have time to spare and it’s an interesting place. But I’m there to photograph the station.

“My wife is good about it, she’s quite happy for me to be out of the house. She’s not really interested in railways herself.”