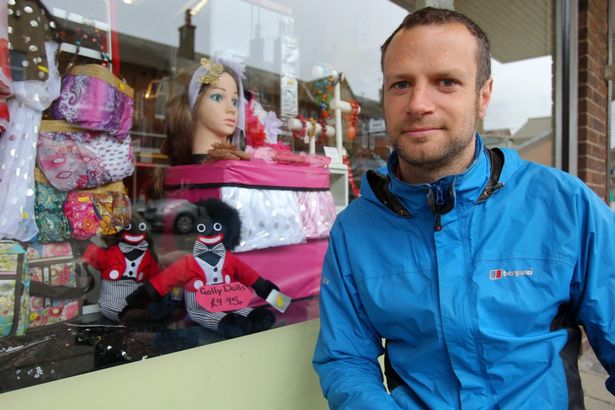 A craft shop has stopped selling golliwogs after a backlash from locals.

Haberdashery outlet Stitches in Bideford, Devon, had the dolls in its window for two weeks but removed them after some residents described them as “backwards”.

Owner Jane Ellis said she did not intend to cause offence, adding: “I’m not representing them as golliwogs and I bought the pattern from a reputable source.

“Now I am aware they have caused offence I will take the pattern off sale and out of the window. It was never my intention to offend people.”

Complainant Mary Dewson said: “I know they’re not illegal in the UK but this is the 21st century and they are emblematic of an outmoded and racist society. I’m pretty alarmed at how backwards thinking people from Bideford can be.”

Devon and Cornwall Police have said it is not illegal to sell golliwog dolls or the knitting patterns to make them.

One thought on “HABERDASHERY SHOP FORCED TO REMOVE GOLLIWOGS FROM WINDOWS”