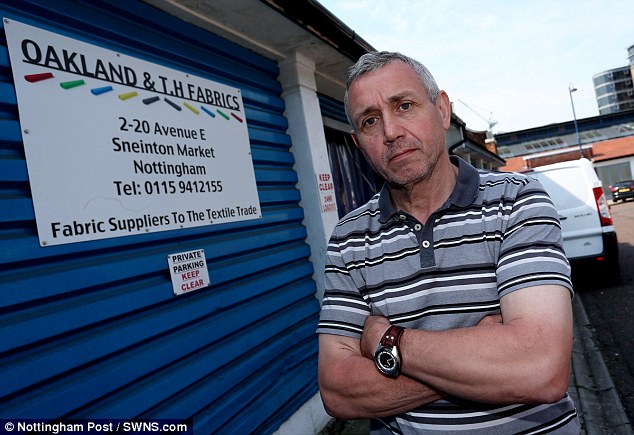 A British market which has just undergone a £4 million refurbishment is sitting virtually empty because barmy EU rules bans the stalls – from having TILLS.

Historic Sneinton Market in Nottingham has seen just three businesses set up inside despite reopening six months ago with 46 spaces for stallholders.

Traders say restrictions from the European Regional Development Fund, who paid £2.44 million into the scheme, are putting potential business off.

EU rules state traders can buy and sell online and via a merchant based at one of the market’s other units.

But bizarrely they can’t take payment directly from browsing customers or have their own till within their own stall.

The conditions of the EU funding meant that the money could only be spent on the “creative industries” – which does not include retail.

It means businesses there cannot now operate as a traditional market place -something it had been doing since the 19th century.

As a result, the once thriving 160-year-old market has been left looking like a “ghost town” after just seven per cent of the stalls were snapped up following the multi-million pound facelift.

Fabric wholesaler Trevor Baker, who owns Oakland Fabrics which was moved to the council-run stalls which haven’t been refurbished, said he feared for the future of the market.

He added: “When I first came here it used to be really vibrant.

“If you arrived at 7am you’d struggle to get a parking space because it was so busy but now it’s dead.”

Dave Klyman, who runs Fabric Fabric, said the EU conditions mean they’ve been forced out as they sell directly to customers.

He added: “My business would be ideal for a creative market.

Lesley Mee, from charity furniture shop Haven Housing Trust which is also based on the council-run part of the market, said the lack of direct sales to customers would put traders off setting up there.

She added: “They’ve had a nice paint job but there’s not enough facilities in there.

“You can’t have a till either. It doesn’t make sense.

“Years ago it was thriving. Now, they’ve spent millions and it’s nowhere near what it used to be.”

Francesco Lari, Nottingham city chairman of UKIP, said the restrictions were a “typical example of how the EU hamstring’s business”.

He added: “This is a common thing. The EU is very good at creating restrictions but this doesn’t make sense.

“If we wanted to make sure they were creative industries we could do make that decision locally, by consulting local businesses, without the caveat.”

Nottingham’s Creative Quarter, which runs the market, says six new independent traders are in the final negotiations of leasing units.

But only three businesses are fully set-up in the 46 spaces so far.

CEO Kathy McArdle said:”We think we are getting a really good quality of business moving in, a really great mix of creative and digital industries.

“We are creating a strong business community which we think will create a unique atmosphere.

“We’re confident we are on target. And it’s becoming a really exciting place to be.”

The market was given a £4million facelift using £2.44million from the European Regional Development Fund and £1.45m of funding from Nottingham City Council.

*Sneinton Market dates back over 160 years and there are records of the market being in operation in the 1850s.

In early Victorian times, the lace making and stocking industries led to gross overcrowding within the old city walls.

After relocating the wholesale market developed from 1938, and the thriving, bustling 60 stalls or so traded for well over a century.