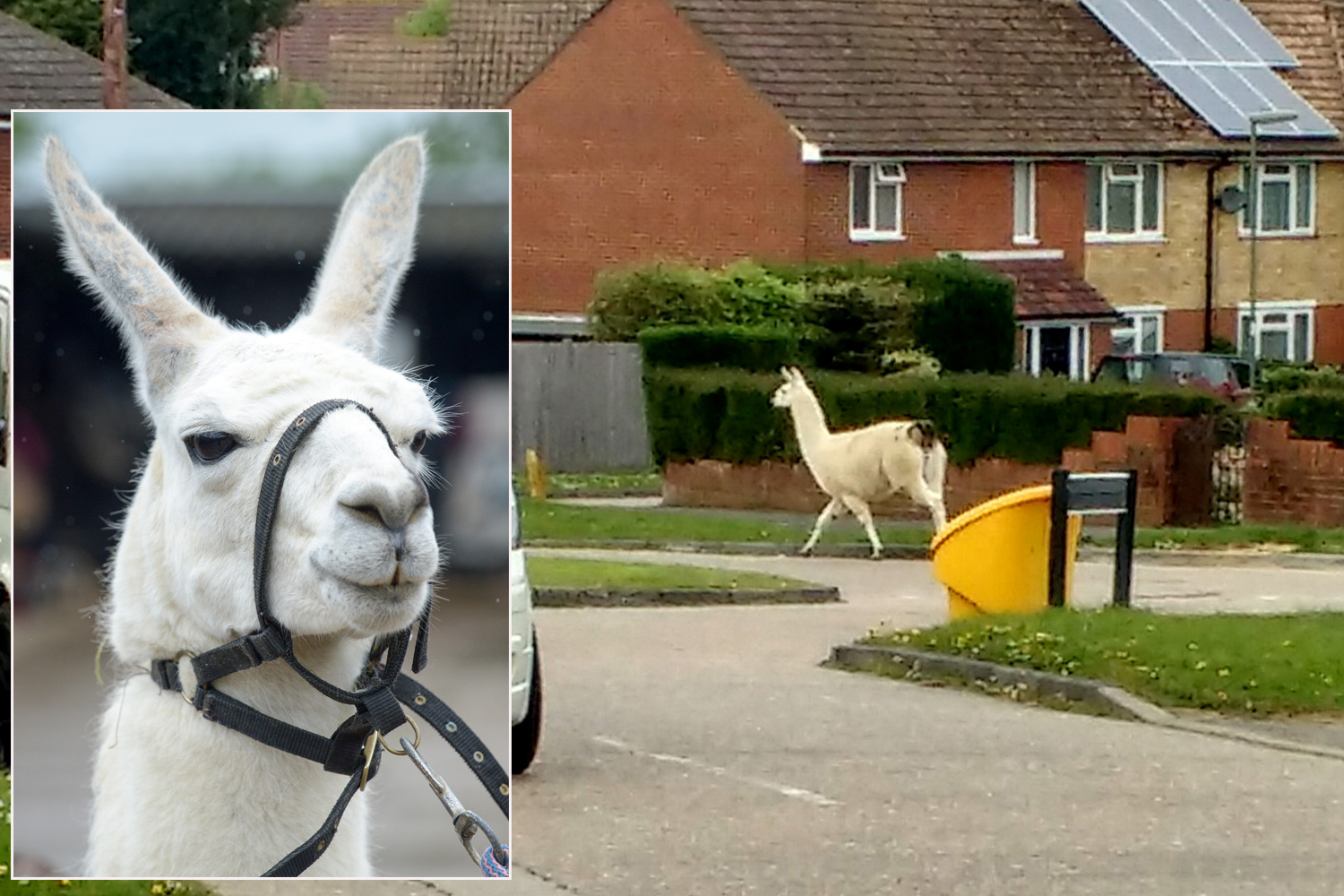 A woman was hailed a hero for saving her friend by rugby-tackling a garden intruder – a LLAMA.

Alex Gache leapt into action when she got a call from a panicked pal and swiftly brought the escaped llama – named Brad Pitt – under control with a hefty tackle.

Brad Pitt escaped from a field and evaded police as he roamed freely around a village, stunning residents who initially thought it was a big dog.

Police were in hot pursuit of the South American pack animal, but despite cornering him, he managed to escape and wandered between busy roads and back gardens on Saturday afternoon.

Struggling to catch the runaway llama, 48-year-old Alex set off in a lorry to try and catch Brad, who was wandering around streets and gardens in Reigate, Surrey.

Alex, who owns three llamas at her equestrian centre, said: “I became aware at about 6pm because I have llamas and the police called.

“They herded him into a field in Reigate but he decided he didn’t want to stay in the field and went walk-about again.

“He was seen on the A217, jumping into the road and back again into gardens.”

Alex and her friends spotted the llama walking in a housing development and spent two hours attempting to contain the animal before she bravely tackled it to the ground.

She added: “He took one look at the lorry and ran.

“It was starting to get dark and I called the police again – a llama jumping in front of a car would have been a very scary accident.

“He was just terrified of people.”

Alex bounded into action and charged at the llama, before grabbing him around the body and firmly but gently bringing him under control.

Jack Read, 24, was on his way home from work and said he couldn’t believe his eyes when he spotted Brad trotting along the pavement in front of him in Woodhatch, Surrey.

Jack said: “I looked up and I thought it was a big dog, but then I realised what it was, this big white woolly thing.

“I didn’t take a photo until it started trotting off, nobody was chasing it.

“It was on its own just exploring just round the corner from where I live.

“I was walking home from work at about 3pm and I just saw it.”

Alex is now caring for Brad Pitt in one of her stables and says the owner was very apologetic when he heard about the llama’s escape.

She said: “I’ve seen how agile llamas can be, they can jump over hedges and fences quite easily.

“I’m keeping him in a stable, I’m not risking putting him out anywhere just in case he escapes again.”

“The owner is coming to collect it on Wednesday, I think they were a bit mortified.

“They said he lives with two other llamas, Thelma and Louise.

“They were very apologetic. But they’re on holiday so can’t come and collect Brad until Wednesday.”

“The first call came in around 3.20pm, with further sightings reported throughout the afternoon and evening.

“Officers attended the incident and located and contained the animal but unfortunately it managed to escape again.

“The llama was eventually located later that night after being spotted running loose along the A217 in the Duxhurst area.”

“It was contained and is currently being cared for by a member of the public.”