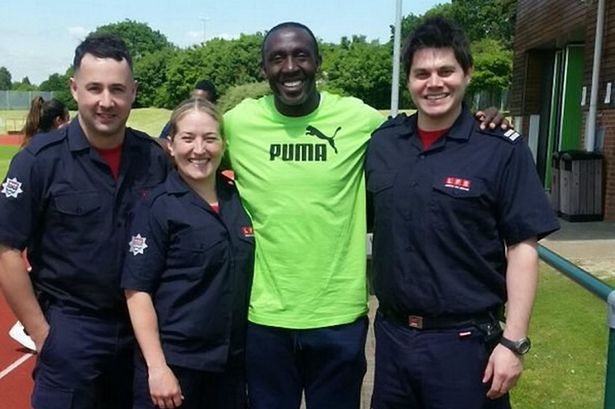 Firefighters rushing to the scene of a crash were saved from heading in the wrong direction after a passer by sprinted into action – LINFORD CHRISTIE.

The former fastest man in the world was quick off the blocks to help the fire crew who were struggling to find the location of a car crash.

The Olympic hero, who won gold in the 100m at the 1992 Barcelona Olympics, sprinted into action and assisted firefighters from Hillingdon Blue Watch by helping them get to the scene of the two-car collision, on the A40 in west London.

Witnesses who dialled 999 were unable to give a precise location, but the gold medalist had been passing and was able to direct a crew from Hillingdon fire station when they approached.

He said: “Linford Christie had been passing by when it happened and had pulled over to help.

“He waved us to the correct location as the address on the call slip was vague, so it saved us valuable time in arriving.

“Afterwards he invited us to visit him at the track where he is training Olympic hopefuls. He was unbelievably nice and giving with his time.”

Mr Kerslake added that the incident highlighted the importance of providing the most accurate information possible when calling the emergency services.

Two people were treated at the scene by London Ambulance Service following the collision on the A40 eastbound slip road in Denham, west London.

One engine from Hillingdon fire station and one from Buckinghamshire Fire and Rescue service attended the incident.