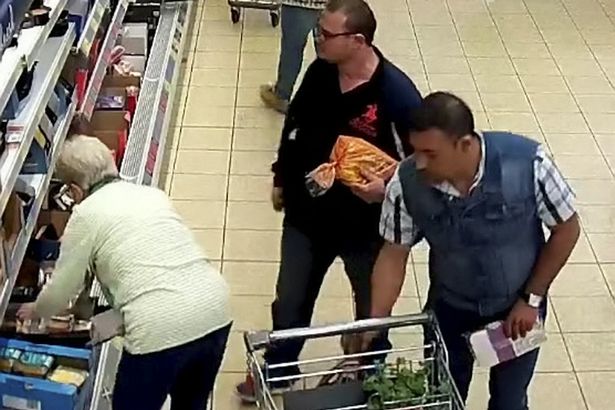 Police are hunting two brazen thieves who were caught on CCTV stealing a pensioner’s purse while she bent down to pick up some food in a branch of Aldi.

The victim was pushing a trolley in the store, in New Coventry Road Sheldon, Birmingham, when she stopped to browse the bottom shelf of the fridge section.

CCTV footage shows two crooks approach the woman and while one walks over to distract her the other reaches into her bag which was hanging from a hook on the
trolley and steals her purse.

A west Midlands Police spokesperson said: “We are looking for two men who stole a woman’s purse while shopping in ?Aldi in Sheldon on Friday 3 June.

“The victim was pushing a large shopping trolley when she stopped to quickly browse the delicatessen section.

“It was at this point that the opportunist thieves pounced and stole her purse from her large holdall bag which she had placed at the rear of the trolley.”

One of the men was white, middle-aged, wearing glasses and had short-cropped hair while the other was Asian, wearing a blue denim waist coat and short-sleeved white shirt.