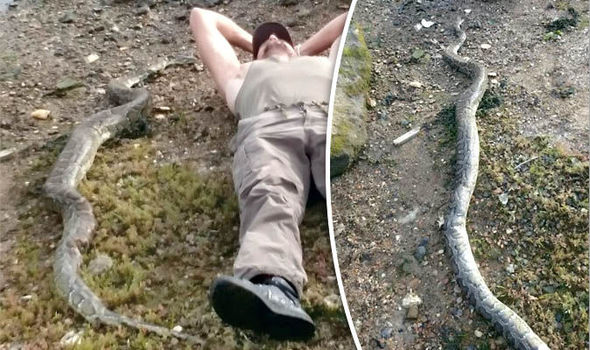 Dog-walkers had a shock as they tread their usual coastal route – when they stumbled across a massive PYTHON that washed up on the shore.

The giant snake, which originates from Southeast Asia, was found by surprised step-brothers Ross Turner, 34, and Mike Creighton, 36.

The pair found the huge dead snake – and the rotting stench surrounding it – out on a dog walk on the Isle of Sheppey, Kent, on Sunday evening, when the tide was coming in.

Ross, a self-employed landscaper, said: “We couldn’t believe it.

“As soon as we got out of the van we saw something shimmering by the shoreline and went across to investigate.

“At first we thought it was sunbathing.

“I thought I was going for a walk not a safari. I’ve never seen a snake as big as that before, not even in a zoo.

“It was just lying on the beach with its mouth open showing its teeth. I don’t know how long it had been dead but it smelled horrible.”

Puzzled Ross had no explanation for the suspicious sea serpent, but says it looked as though it floated in on the tide .

He added: “It was facing in line with the tide like it had been washed in.”

To fathom just how long the deceased predator was, Ross laid out next to it on the beach, whilst step-brother Mike snapped a picture.

“Perhaps it is someone’s pet which has escaped?”

He added: “I think maybe someone dumped it, Although if it was my pet that had died I’d have given it a funeral.”