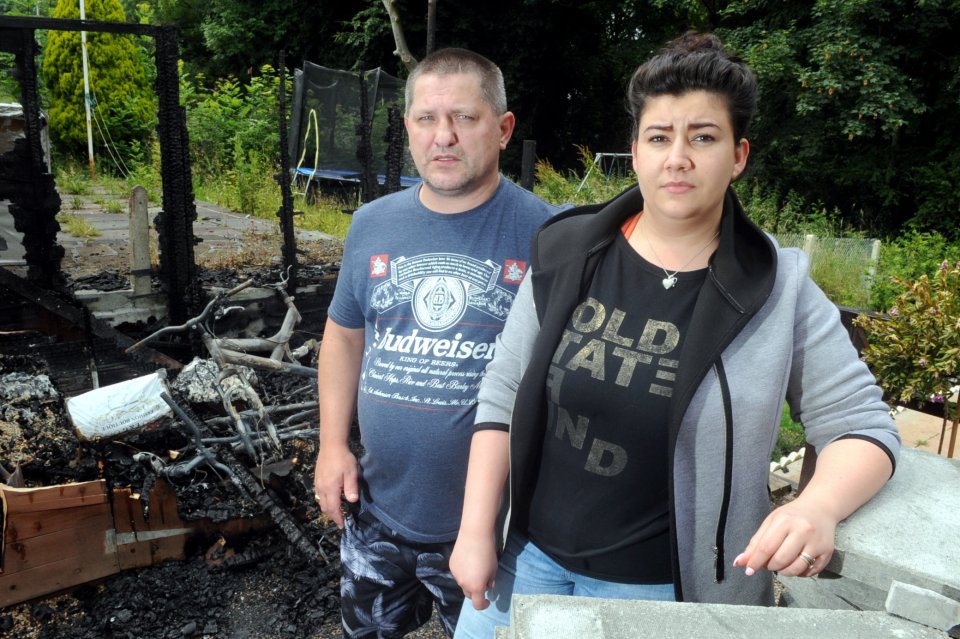 Police are hunting racist arsonists who set fire to a Polish family’s shed and left a note telling them to “go back to your f***ing country” – with the victims blaming BREXIT.

The suspects set the shed ablaze near the family’s home just before midnight on Wednesday (6/7) – completely gutting the building.

They then left a sinister note made up of newspaper clippings saying: “Go back to your f***ing country’.

Greg Alba, of Plymouth, Devon, posted photos of the fire and note online.

The dad wrote: “This happen yesterday I’m…angry because I’m not bad person me and my family come to UK on 2007.

“When I come to UK I start working on second day I don’t take any…JSA ESA OR SIMILAR BENEFITS.”

On Facebook Mr Albia added: “After f*cking BREXIT what happen !!!! I find this person who do this !!!!!”

Greg, who works at a computer shop, said he came to the UK for a “better life” and that things had changed since the BREXIT.

He was woken by two of his daughters who alerted him to flames billowing from the garden shed.

The fire spread to the house, shattering glass in the bathroom window and melting the drain pipes.

Mr Alba said that this was the second attack on his family.

Kita Valentine said on Facebook: “Oh my goodness that’s disgusting I’m so ashamed to be British right now I’m so so sorry Hun I hope you and your family are okay xx.”

Ian Justin wrote: “That is disgusting. So sad that anyone would be like this.”

Forensic examinations of the scene and the letter are underway, and the family are being supported by the police and partner agencies as the investigation continues.

Inspector Darren Green from Devon and Cornwall Police said: “I am appalled by this crime and incidents of hate such as this are treated as a priority by my officers.

“Hate crime has no place in Plymouth and we will do everything possible to locate those responsible for the fire and the disgusting letter sent to the victims.

“We believe this fire was started deliberately, was racially motivated and could have endangered the lives of the occupants.

“We are asking for the public’s help in this matter as someone will know who is responsible.

“If anyone knows anything that can help with our investigations, then please get in touch. We would also like to hear from anyone who saw anything suspicious last night and in the moments leading up to the fire, or anyone seen fleeing the scene.”