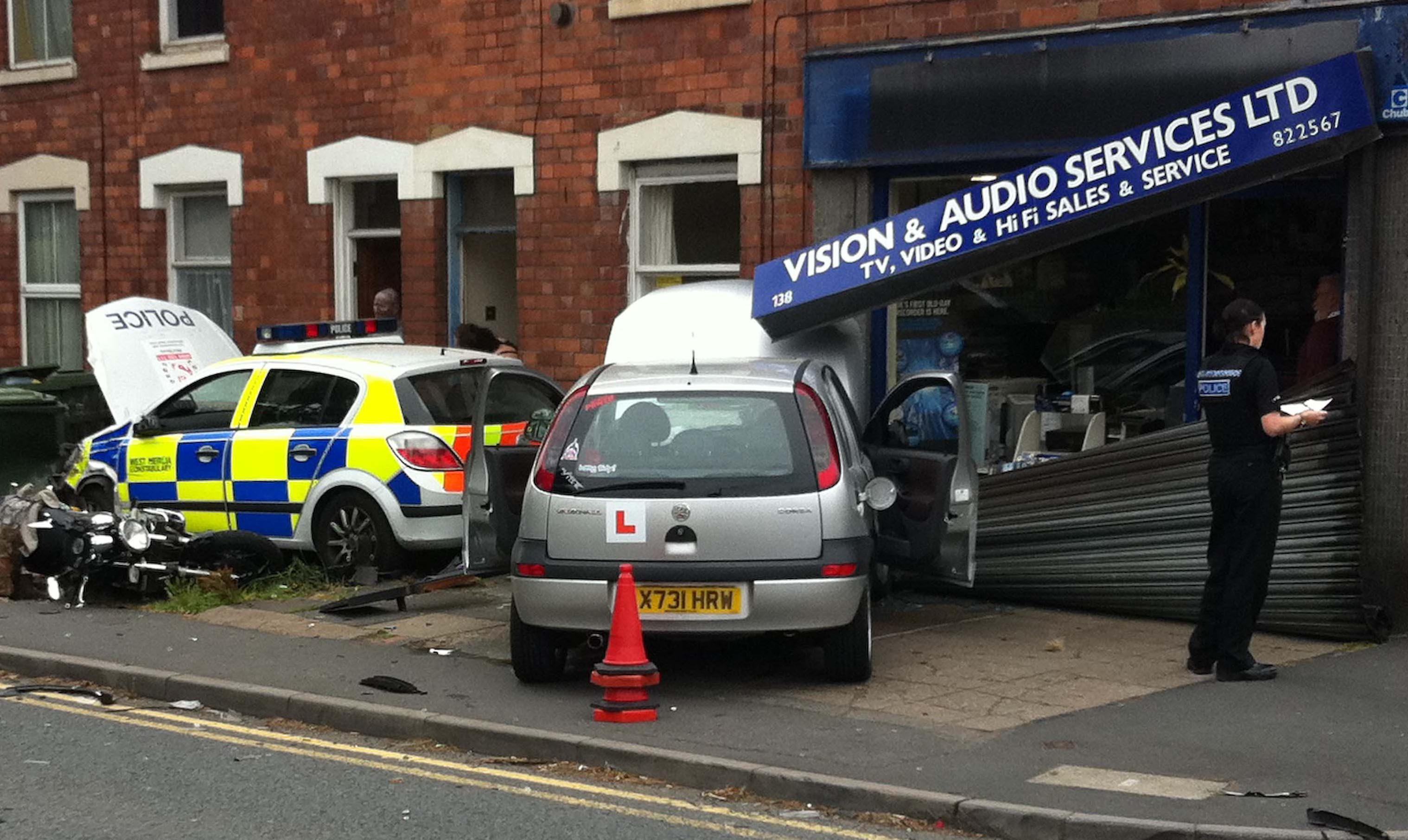 A STORE owner had a miracle escape when a police car crashed into his shop window after colliding with a learner driver on blue lights.

Peter Mason escaped unscathed despite diving for cover as the patrol car crashed into his shop front while he chatted with a customer on Friday afternoon.

The car ploughed into Vision and Audio Services Ltd in Kidderminster, Worcs, after colliding with a L-plate Corsa – believed to a be a young man having a driving lesson with his father.

Red-faced cops then quickly left the scene leaving shocked Peter to deal with the damage, he claims.

As well as his window, the shop sign and metal shutters were damaged beyond repair as were one of his staff member’s GBP9,000 motorbike.

He said: “I was in the shop with a customer and I just saw these two cars coming towards me.

“The police car has hit the drivers side of a learner driver and smashed through a bollard, into the shop and flattened a neighbours garden wall.

“This young learner who was out with his father in a car they’ve only had 12 months did nothing wrong, he kept good control, it all points towards the police.

“My shop was a right state, I’ve never known anything like it and the noise was just horrendous.

“And all of a sudden the police are gone. They didn’t help sort anything out and just left with me with this great big mess. The sergeant came in for a second and left.

“There were ambulances and fire engines and pick-up trucks – but the police just seemed to disappear.

“I’m in a bit of a quandary what to do, the police have told me to go through the insurance company but they should be sorting it out, not me.

“One of our engineers had his GBP9,0000 motorbike completely mangled, and again its all been left.

“I can understand the complications with an individual but surely the police could be more helpful.

“I had to open the shop on Saturday with no front window, metal shutter or a sign. ”

Peter said it was a miracle nobody was killed as the road is usually busy and lined with people.

“Everybody got up and walked away, and it was incredible that a road usually busy with kids and people walking their dog, was so quiet,” he added.

“It was a miraculous escape for everybody involved – including myself.”

The road was closed for several hours.

West Mercia Police said the force would be launching an internal investigation into the crash.