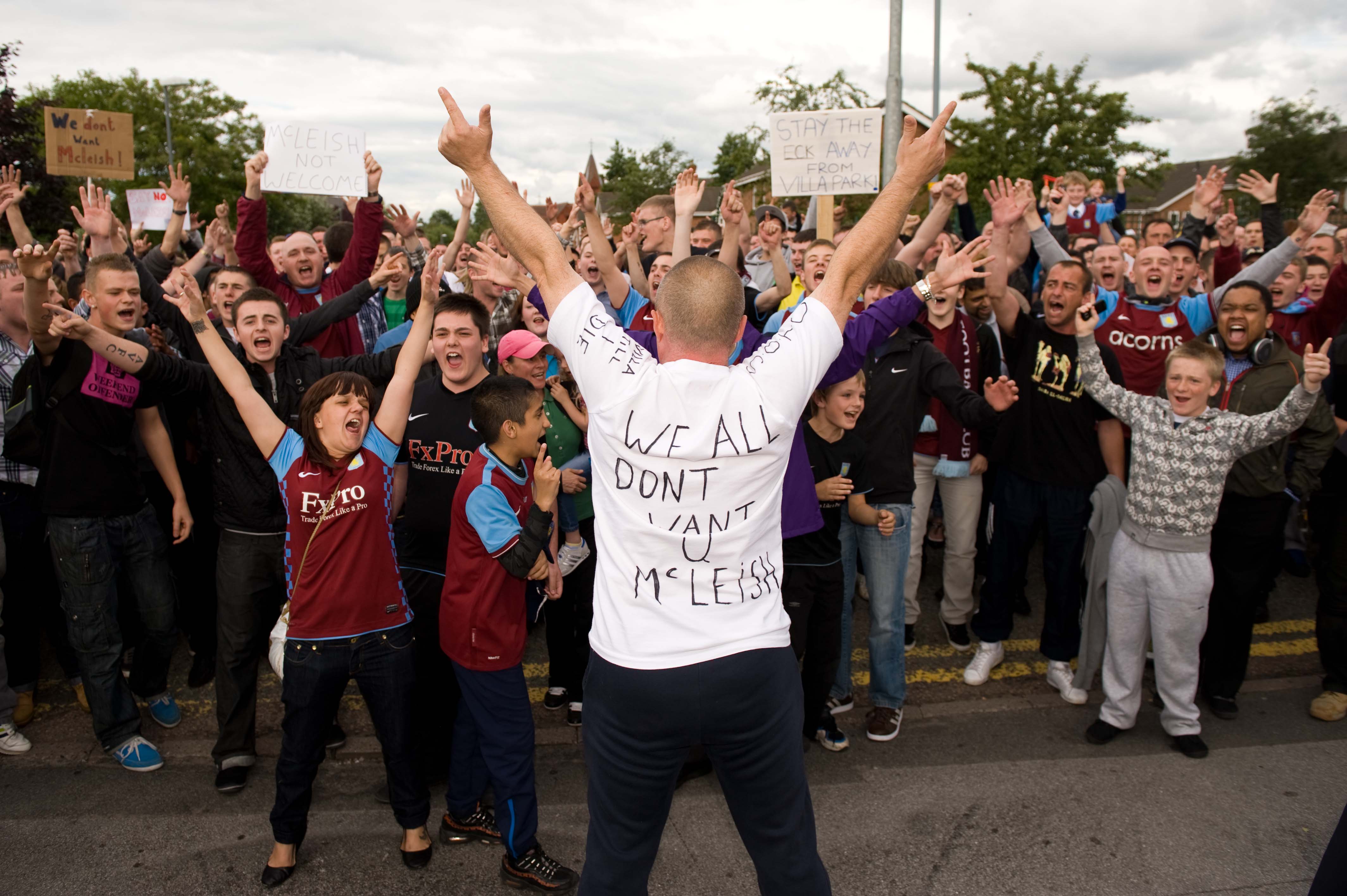 Carrying banners and chanting the fans blocked roads around the stadium before taking over the steps to the club’s famous Holte End.

On banner read ‘Stay the Eck away from Villa Park’, referring to McLeish’s nickname ‘Big Eck’, while another read ‘once scum, always scum’.

The angry protest was organised via social networking sites including Facebook after it was revealed that McLeish had cut short a holiday to have talks with the Birmingham club.

Initially gathered by the club gates the crowd chanted angrily against the potential appointment, saying that no fans would turn up to the first game of the season should the former Rangers manager take over the reigns following Gerard Houllier’s departure last month.

McLeish resigned from the St Andrews club earlier this week, citing the sacking of key technical staff as his reasons for leaving.

Birmingham chiefs have reported their city rivals for allegedly ‘tapping up’ McLeish and are demanding compensation before he joins Villa.

David Moore, 40, helped to organise a banner that has hung across the gates for several days saying ‘No McLeish at Villa’.

“We all spend a lot of money every year on the club, and no one wants him here,” he said.

“He’s not good enough for us, I will want my money back for my season ticket if he joins. ”

Shortly before 6pm the situation almost turned ugly as the swelling group flooded towards the gates,  blocking the road.

Club officials immediately locked and chained the gates, leading to one can climbing to the top to lead chants.

Shortly after several angry fans tried to break through the gates unsuccessfully before deciding to head towards the Holte End, home to Villa’s most vociferous fans during games.

46-year-old Trevor Baker and his son Tom, 25, came from Solihull to join the protests.

“It’s got nothing to do with his connection with the Blues,” said Trevor.

“If they’d had a great manager and we nicked him off them I’d be delighted. But he’s just not good enough.

“Even Birmingham fans will tell you he isn’t, he only plays negative football.”

The pair have a preferred appointment that is echoed by many other Villa fans.

“He relegated Birmingham twice,” added Trevor. “The Cup makes no difference, they didn’t win it, Arsenal lost it.”

After half an hour the group headed back to the club gates, after roundly booing some passing police officers and a club official who came to talk to them.

By this point the numbers had swelled so much that the road was completely blocked, leaving drivers trapped in the road.

Soon protesters had climbed the railings and the gates, changing to be let into the ground they consider to be there’s.

Police closed the road at around 7pm with about 500 people blocking any access around the stadium.

Soon after fans broke through the gates and ran to chant outside the club reception.