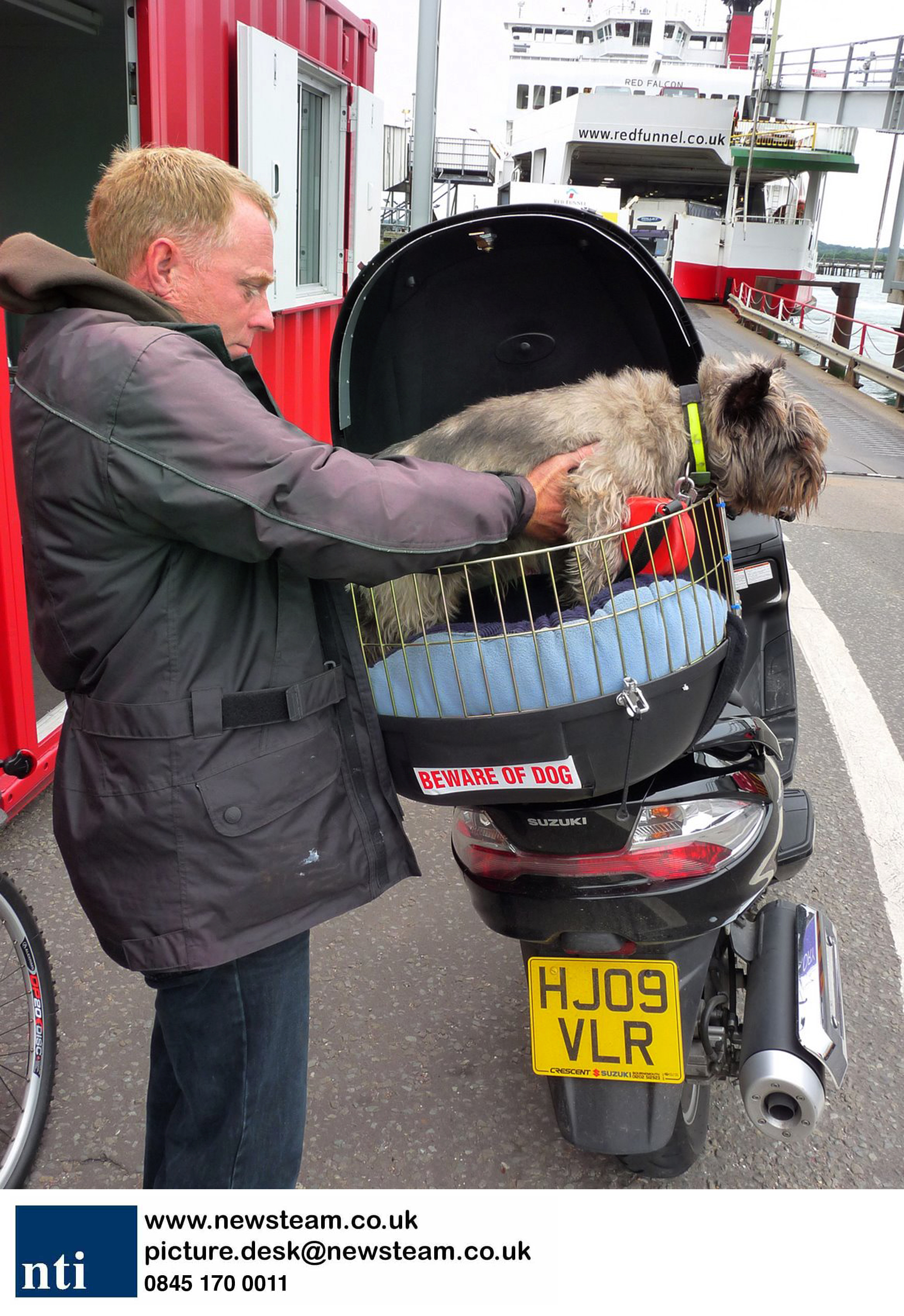 AN ANIMAL lover who cannot bare to leave his beloved dog behind while he goes to visit is girlfriend has come up with a unique way to carry his pet pooch with him on the back of his motorbike.

Rob West is so devoted to his dog Diesel that he invented an innovative box to carry the six-year-old Cairn Terrier in while he travels to the Isle of Wight every week.

Self-employed builder Rob, 45, a part-time inventor, came up with the innovative plan after he met his Polish girlfriend almost two years ago.

The dog lover, who has reared Diesel since he was a puppy and even takes him to work with him, lives in Romsey, Hampshire, on the mainland but was fed up of coughing up to take his car on the expensive ferry every Friday evening.

So, determined to come up with a solution, Rob set to work – and it wasn’t long before he had his first idea.

The builder tried putting Diesel in a metal cage strapped on to the back of the bike but he soon had a problem.

“Every time I pulled away from the lights I would pull a ‘wheelie’, because of the weight of the metal cage,” he said.

Desperate not to have to leave Diesel behind at home, Rob worked day and night until he finally solved the problem.

“I looked to see if there was anything on the market that might do but as far as I know there is nothing commercially available for taking dogs on the back of a motorbike – and that’s where my inventor hat came into play,” he said.

“I took a normal plastic motorcycle box to bits and wrapped around the base a metal grill so Diesel could look out of and of course breath! Then fixing on a couple of hinges to the lid I put it all together.”

Every Friday at 6pm, Diesel can be seen in his special box on the back of Rob’s bike waiting for the ferry – and he has already built up a group of fans.

“I get a lot of people looking, there’s quite a few people who come over and ask lot of questions about him and say they have never seen anything like it before,” he added.

“I’ve had people ‘toot me and wind down their windows to shout hello. Everyone who has spoken to me about it, it has always put a smile on their face instantly.”

Although he admits he expected some criticism from sceptical animal rights activists, Rob says he has not received one complaint and is adamant that he would stop right away if he thought Diesel didn’t enjoy the ride.

“I’ve not had any negative comments about it at all,” he added, “I wouldn’t do it if he wasn’t happy.

“He willingly goes in and he settles down, he is definitely happy. He is a company person and would rather be with me – he loves the island and the beach walks, it’s the life of luxury for him.”