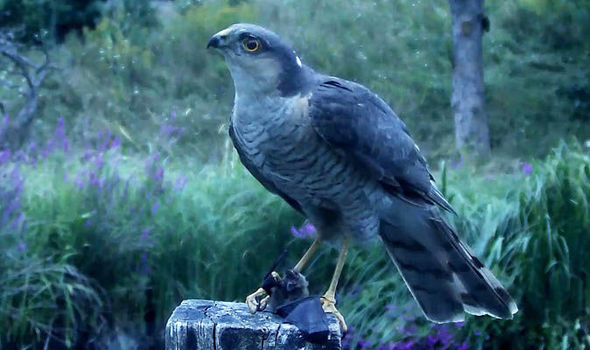 These astounding images show a sparrowhawk snacking on a bat and is regarded to be the first video evidence of this type of behaviour occurring.
It is already well documented that the birds of prey do eat bats, but it has never been witnessed before this example that was filmed in Worcestershire.

These amazing shots were taken via remote camera at dusk last week, just after the bats had emerged to feed.

The raptor was recorded at Yew View, a private seven acre garden managed for wildlife by Kate MacRae.

Kate, who has made appearances on Springwatch, Autumnwatch and Countryfile set up more than 30 cameras on the site to monitor wildlife 24/7.

Previous studies have demonstrated that 97 per cent of food taken by Sparrowhawks at this time of year were birds, with the remainder composed of rodents, weasels, young rabbits and some bats.

Kate said: “The post the Sparrowhawk is filmed on is on the edge of a wildlife pond in the middle of the site and we have filmed many species there, mainly kingfishers.

“I was excited to see a sparrowhawk appear on the post, with prey in its talons.

“This is not the first time we have had a sparrowhawk on the post, but we have never filmed them with prey.

“This prey looked small and initially I presumed it was a fledgling but as I watched the footage I was amazed – the sparrowhawk had a bat.

“I had to watch the footage again and slow it down to make sure it was definitely a bat.

“I have never seen anything like that before. I have heard potentially that they can catch bats but seeing it was pretty special.”

She added: “Many species of raptor don’t return to roost until it is almost completely dark which means they could still be hunting at dusk when bats emerge from their roosts.

“It is hard to see but going on the size of it and what you can see of its face we think it might be a Daubenton’s bat which do feed over water.

“I am thrilled with the footage. It is quite dark, but you can clearly see that this individual has a bat.”

Kate, 48, a wildlife consultant who runs the blog WildlifeKate, also records all sorts of wildlife appearing in her own garden in Lichfield, Staffordshire.

Sparrowhawks are a protected species and their numbers are gradually recovering with a 70% increase between 1970 and 2013, but the last 20 years have seen them decline by 15 per cent.