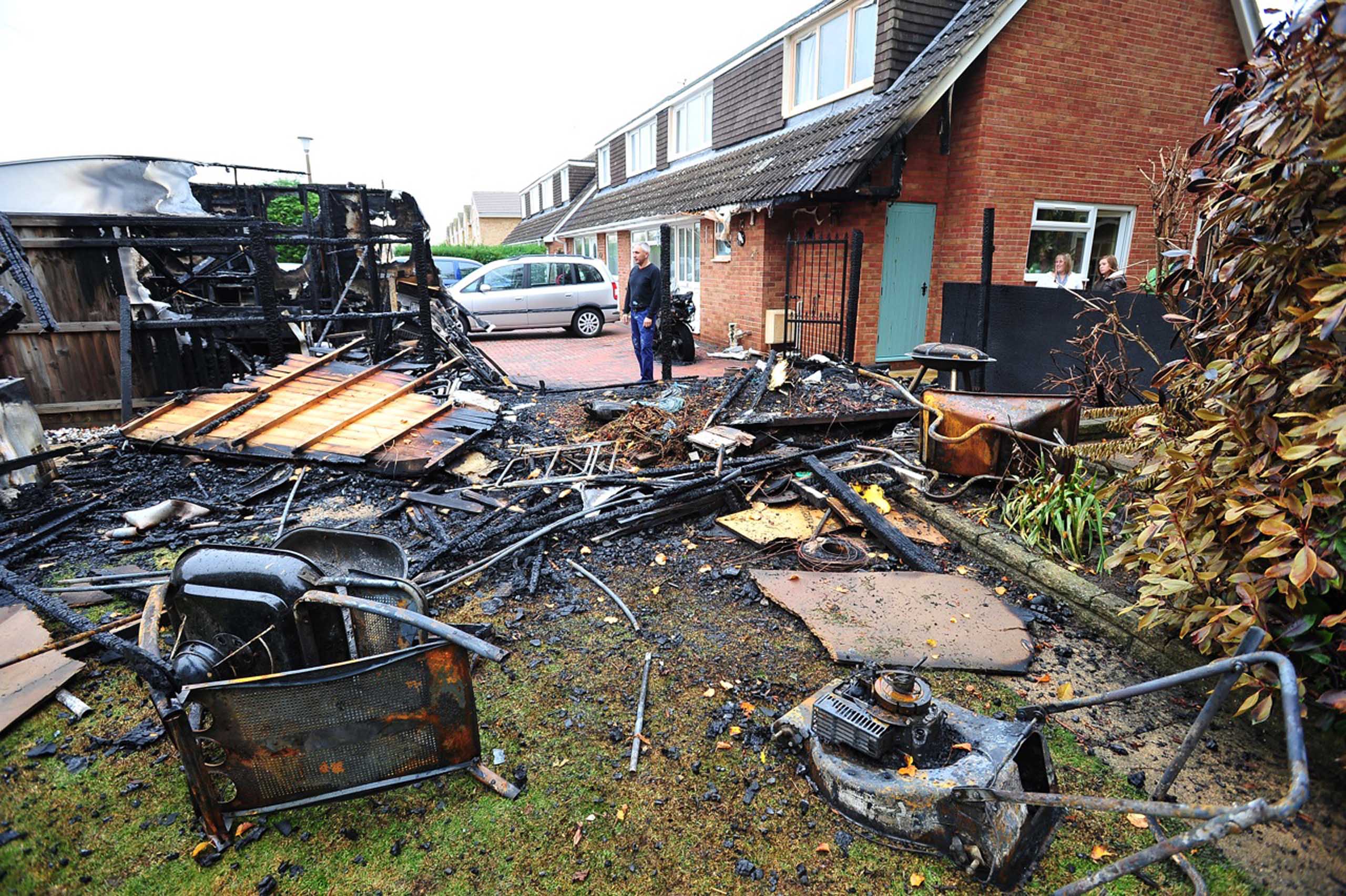 Notice: Trying to get property 'ID' of non-object in /home/newstoda/public_html/wp-content/plugins/wp-author-box-lite/core/functions.display.php on line 87

Notice: Trying to get property 'ID' of non-object in /home/newstoda/public_html/wp-content/plugins/wp-author-box-lite/core/functions.display.php on line 148

WHILE many will be mowing their lawns this weekend for the final time before winter arrives, spare a thought for this keen gardener.

After putting his petrol lawnmower away in his garden shed, Chris Underwood was shocked to say the least when it caught light and caused this level of carnage to his garden, house and car.

After setting fire to his beloved shed, the blaze then spread to the fence, then to his neighbour’s caravan, then his motorbike and then the front of his house and car.

The blaze, in Peterborough, Cambs, caused thousands of pounds of damage to his neighbours property and left the place looking like a bomb-site.

It started by accident when Mr Underwood put his two-year-old lawnmower into his wooden shed after doing the gardening on Wednesday evening.

After leaving it, the mower caught alight and flames spread quickly from the shed to the back garden fence Mr Underwood shares with next door neighbours Shaun and Jackie Saunders and their children Kayleigh, 16, and Christopher, 13.

After the fence caught light, the flames spread to the Saunders’GBP3,000 Muskateer caravan, GBP6,000 motorbike, the guttering and windows and melted the paintwork of his Vauxhall Zafira.

Mr Underwood spotted the back garden blaze at 7pm, an hour after putting the lawnmower away.

When he saw the flames creeping towards his next door neighbour’s house, he frantically went to warn them of the danger, not knowing that none of the family were at home at the time.

Mr Underwood, 52, said: “I was so worried I almost put my hand through the glass. It felt like ages before the fire crews arrived, but I suppose it was only a few minutes.

“I tried to move their motorbike but somebody told me it had caught on fire. It all just spread so quickly.

Mr Saunders, 49,  said: “We are all in a state of shock, but it was just one of those freak accidents.

“Our neighbour is very apologetic but it’s one of those things, there’s nothing we can do

“It’s not so much the cost, it’s the sentimental value.

“We think we will get our insurance paying out on everything apart from the caravan, which did cost GBP3,000.

“Me and my wife were out playing badminton and got a phone call to say there was a fire. Luckily, the children were out of the house as well at the time.”

Fire crews were called to the fire at 7.01pm. They left at 8.45pm and returned to carry out an investigation yesterday morning.

The only things found in the shed that caught fire was the lawnmower, a barbecue and cleaning equipment.

A spokeswoman for Cambridgeshire Fire and Rescue Service said: “The cause of the fire was accidental and was caused by faulty equipment. An accidental fire caused by an electrical fault can be completely unexpected.

“This incident shows how easy it is for a fire to quickly spread to nearby vehicles and buildings.

“You should make sure anything which might start a fire, including electrical appliances, is kept well away from anything else that is flammable.”