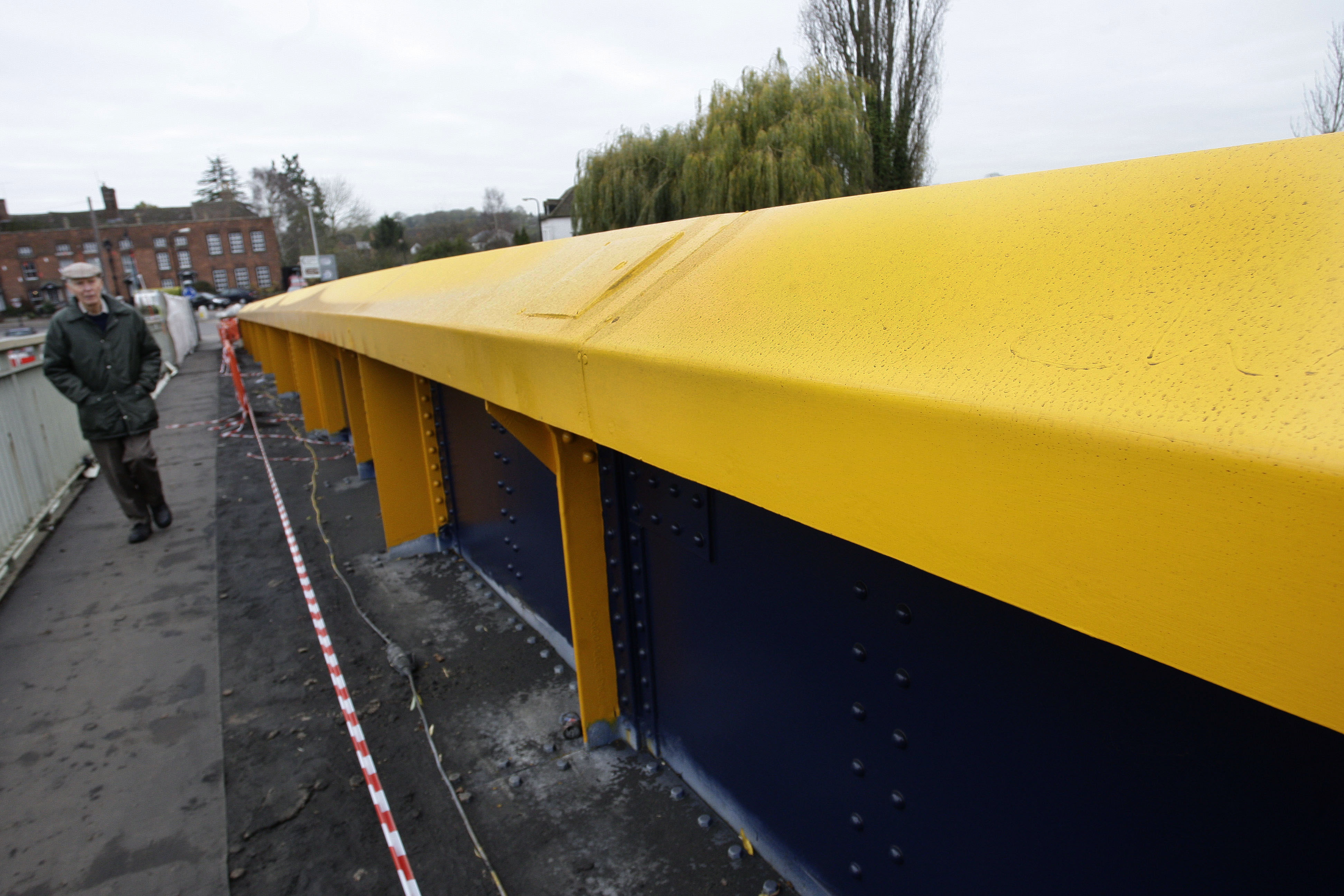 BLUNDERING council workers have accidentally painted a bridge bright YELLOW in a small town at the cost of thousands of pounds to the taxpayer.

Furious residents in Upton-upon-Severn, in Worcestershire, had voted for a modest duchess blue with gold trim colour for their historic bridge that welcomes visitors to the quaint town.

But bungling bureaucrats went ahead and painted the bridge a ‘dreadful’ shade of yellow – a mistake which will cost GBP5,000 to put right.

The embarrassing gaffe came to light last Thursday much to the dismay of townsfolk.

Nearly 700 locals were asked which colours they wanted the bridge to be painted during a six-week consultation in August by Worcestershire County Council.

The chosen colour scheme, out of a choice of five, was duchess blue with a gold trim – in stark contrast to its current colour.

The council has admitted it knew the yellow colour was wrong, but said it was forced to go ahead with the work because of its commitment to reopen the bridge to two-way traffic over the Christmas period and in order to protect the metalwork during the winter weather.

Angry shopkeepers fear they will lose thousands of pounds in trade due to partial closures of the bridge.

Upton town councillor Eric White, who labelled the mistake “dreadful”, said: “I don’t know who decided it would be a good idea to put all that gunge on it.

“You need dark glasses just to go across it and it certainly does not do anything for Upton.

“If it is going to stay like that until the new year then I suppose we could always get some buckets of mud and tone the colour down ourselves.”

Mayor of Upton Councillor Andrea Morgan, said she was a “little surprised” when the full extent of the mix-up was revealed, but she had been given assurances it would be changed.

She said: “Somebody said to me we should have been monitoring it but it was a hard hat area that was closed off and there was nothing [to suggest anything was wrong] as far as we were concerned.

“We did think they would be putting an undercoat on because it was metal, but I couldn’t believe my eyes.”

It is estimated the repaint could cost about GBP5,000, but it has not yet been confirmed whether the council or contractors will foot the bill.

Jon Fraser, the county council’s customer and community manager, said the paintwork had not met expectations.

He said: “Road closures and traffic management originally planned to be in place for the next few weeks have been postponed following contact from traders to help businesses in the run-up to the Christmas period.

“This will allow the contractor to go back and re-paint the bridge when this programmed work continues, with resurfacing and waterproofing planned for the new year, meaning no further delays will occur.”

“We are in discussions with the community to ascertain the best time.”

The renovation is part of a GBP550,000 programme of works to strengthen, waterproof and resurface the bridge, which are due for completion in February, when bridge will be repainted mostly blue, with slats on the side in gold.

The authority took the opportunity to paint the bridge while it was carrying out scheduled reinforcement work in the autumn.

Three-way traffic lights were installed in October for the works and the bridge only fully reopened last Friday.

But traders fear they will lose revenue due to partial bridge closures.

Bob Kay, owner of the Spar shop in the high street, said he lost GBP6,000 per week during the bridge work.

He said: “Passing trade fell off you see because it took about five to 10 minutes to get into Upton.

“The traffic was all backed up. It was horrendous and people just didn’t bother coming into town if they didn’t have to.”

As a result of the disruption, local shopkeepers held two emergency meetings about the bridge work and have now decided to form a local traders’ association, of which Mr Kay is a member.

He said: “The council should have known the bridge was being painted the wrong colour. They should have sent someone out to inspect it as we had all assumed it was just an undercoat.”