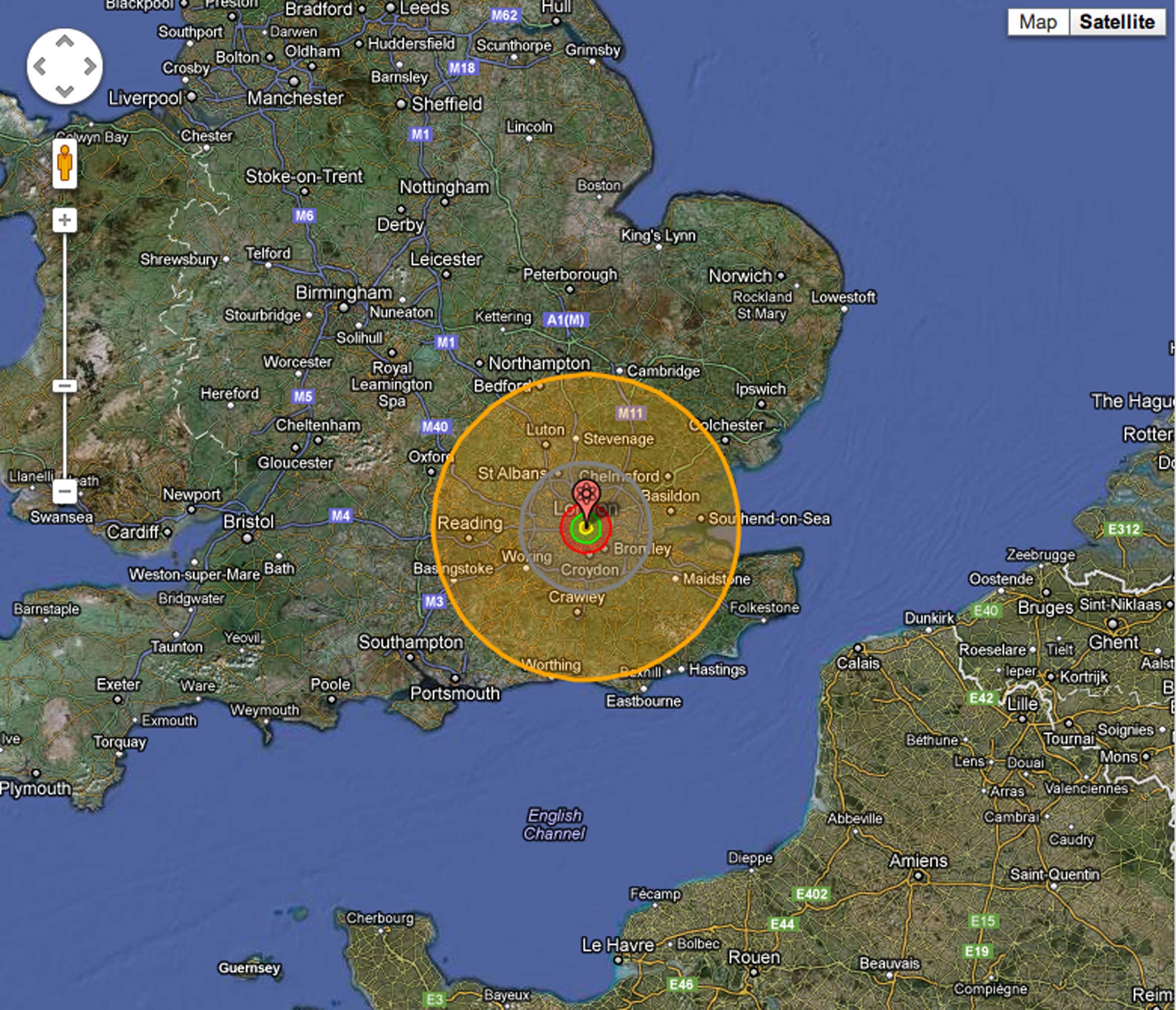 DESIGNED by a Harvard boffin to teach his students about nuclear weapons, this hard-hitting ‘Nukemap” shows the true scale of destruction modern warfare could cause. 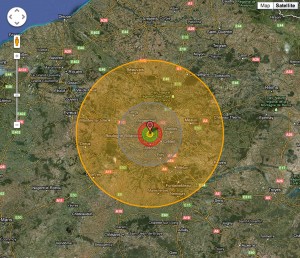 American Alex Wellerstein, a Ph.D graduate from Harvard University who is now the historian of science at the American Institute of Physics, posted the nuclear effects calculator, on his blog last week.

The app, which uses Google Maps, encourages you to pick any destination in the world and then drop a nuclear bomb of your choice on it – allowing the user to see the enormous range of damage it would cause. 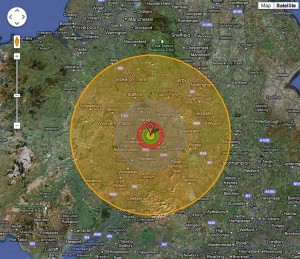 And while the app can be used as a joke to destroy your least favourite city, if you drag the marker to London, England, select the ‘Tsar Bomba’ and then click detonate, the results are staggering.

According to Alex’s calculations, the immediate fireball radius of the blast would be 1.88 miles, with the radiation radius stretching to 4.65 miles – meaning anyone within that range would be dead within hours.

The air blast radius reaches a massive 20.51 miles engulfing Enfield, Woking and Slough, meaning most buildings within that distance would collapse and fatalities would be widespread.

And even though the bomb was dropped in central London, the thermal radiation radius stretches to 47.88 miles – meaning people as far south as Eastbourne and as north as Cambridge would get third-degree burns and would be exposed to firestorms wherever they looked.

Other shocking results in other parts of the country show how even the Yorkshire Dales and Sheffield could be wiped out with a blast in Manchester and Nottingham and Northampton effected by one in Birmingham.

Alex, who has also taught two courses at the internationally renown Harvard, says he uses the ‘Nukemap’ to bring the reality of nuclear weapons to life for shocked students.

“I’ve done different types of map based teaching for the students because I’ve found that students don’t really have a sense of how big a nuclear explosion is,” said the 30-year-old, who lives with his wife in Washington, DC.

“What I like about the map is it makes the explosions look large and impressive but it shows it isn’t the end of the world.

“I think a lot of people think a nuclear weapon goes off and everybody gets blown up or disappears.

“The reality is the buildings would collapse and you would be set on fire, which makes it real and scarier.”

Ranging from the measly ‘Dave Crockett’, the smallest US bomb ever produced at 20 tons, to the terrifying ‘Tsar Bomba’, the largest USSR bomb designed at a remarkable 100 megatons, the effects show just how deadly another world war would be.

Expert Alex, who specialises in the history of nuclear weapons and nuclear secrecy, says because of Google Maps’ limitations it isn’t possible to calculate the level of megadeaths each bomb will cause – but he thinks it wouldn’t be that hard to work out if you knew the population sizes of the area you destroy.

“You’re talking about the effects it could have on different landscapes and whether the buildings are built from wood or concrete, but the map does give you a very good idea of what the major effects would be.

“I definitely do use a lot of humour when I’m teaching because it’s a good defence mechanism for talking about the bombs.

“It has a response from people who say ‘Haha I’ve just nuked my home town’, but on the other hand you have the dread and that’s very potent.

“It’s a dark realisation, I’ve plotted a terrorist bomb at the capital where I live (Washington) and thought ‘that’s not very good for me’ quite a few times.”

The reception of the ‘Nukemap’ has taken the historian by surprise – with a staggering 700 people using the app and 1,500 individual detonations within its first three days online.

“I’ve been chuffed by the reception of Nukemap,” said Alex.

“Since I posted it last Friday morning, nearly 700 people have nuked themselves, or others, using it.

“Shockingly this is still 500 fewer than the number of actual nuclear detonations that have been performed by nuclear states as part of their nuclear testing regimes.

Although the user is free to select any destination in the world, the app even offers preset targets such as New York, Paris, Moscow or Beijing – as well as going a step further by suggesting historical detonations like the Japanese city of Hiroshima from 1945 or the Arctic Circle test site of the Tsar Bomb from 1961.

And while people could accuse the ‘Nukemap’ of warmongering, Alex says he only created the app to display facts and insists there is no political motive involved.

“Most of the people who talk about it are anti-nuclear protesters,” he said.

“They like it because it highlights the danger they create. I’m sort of in the middle on all this so I don’t see it as having a particular message.

“I don’t think nuclear weapons will be go any time soon but I hope we don’t use them. The map is just laying out the facts of it, there is no political message from me.”