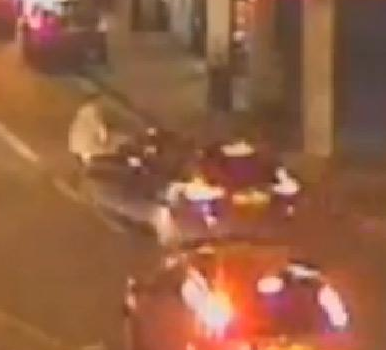 Footage of a woman and a toddler making a “miracle escape” from a hit and run has been released by police as part of an appeal for information.

The 20 seconds of footage shows a woman and child leaving the Sky Blue Fish bar and crossing the road before a black Audi estate overtakes a turning car and ploughs into the pair.

PC Abbi Jones of the force’s Traffic Unit described the incident as “shocking” and appealed to the public for information.

“This could have been so much worse. At the time of the collision, the driver would not have known that the woman and child were uninjured,” she said.

Despite being sent flying by the impact, the toddler quickly gets to his feet and both mother and child escaped the incident with only minor injuries.

Police officers believe the car sustained damage during the hit and run and are appealing to any mechanics who have repaired an Audi estate since December to get in touch.

“Similarly, I want to hear from anyone who has seen a similar car being driven into a lock-up and not come out since,” PC Jones added.

Anyone with information about the incident is urged to get in touch with police on 101 or anonymously via Crimestoppers by calling 0800 555 111.