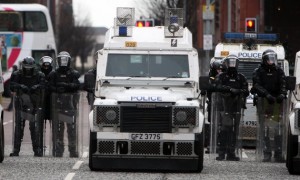 During the last few weeks, the number of racial attacks increased in Belfast and in the vicinities. The police questioned three suspects, one woman and two men, suspected of coordinating such acts. Five new attacks were reported, including an attack with a bag of excrements on a Roma citizen. The suspects, aged around 40, were suspected of many illegal activities of this kind. The operation is named Operation Reiner, and it is considered one of the most important activities of the Northern Ireland police.

The increasing number of hate crimes in Belfast is alarming, especially because intelligence report that paramilitary organizations receive more support. The three suspects were arrested at their home, where the police recovered firearms, ammunition and drugs.

The arrests were made under the Terrorism Act, which gives the press the idea that the organization could be a lot bigger. It seems like the racial attacks are coordinated by the Ulster Volunteer Police, the paramilitary wing of the legal Progressive Unionist Party. However, the representatives of the party claim that they are strongly against the attacks, and that they have no knowledge of UFV forces being implicated in this matter. What the police know is that UFV is active in recruiting new adepts. The latest incident was a graffiti appeared in a wall on Shankill Road, against the Polish immigrants.

The priority for the next days is to search as many places as possible, with the goal of finding the most important members of the organization. The communities start to be worried about the increasing power of those organizations, in a city known for the tumultuous past. Even if the extremist organizations are not as powerful as they used to be, it is important for the police to control the attempt of those organizations to reinstall panic across the city.