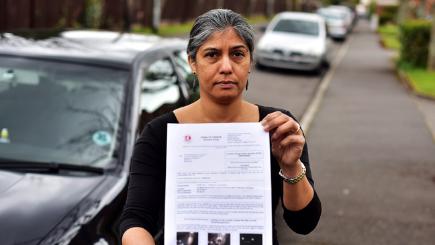 A council has been accused of operating a ‘cash cow’ bus lane with confusing signs where almost 17,000 motorists have been fined in just two years.

The controversial lane, which operates round the clock, catches out roughly 16 people every day – 500 each MONTH.

A Freedom of Information request found that between opening in April 2013 and December last year, 16,718 people were fined for using it.

They are all issued with a £60 penalty notice, with the cost halved for swift payment, meaning that it has raked in up to £1 million for the city council in Bristol.

One local woman who was fined said drivers are being tricked into using the lane near Totterdown Bridge by an unusual road layout and a lack of signage.

Maddy Longley, 46, said Bristol City Council were using it as a cash cow to catch out people who do not deliberately break the rules.

The former library assistant, who was caught in December last year, moved into the left lane because she knew she had to take a left – but it turned out to be a bus lane.

She said: “I’m obviously not the only person to be confused by it and you can see that by the vast number of motorists who have been caught out.

“The majority of people do not deliberately break the rules of the road. People like me are just committing minor infringements without realising it.”

Maddy appealed her fine after she realised one of the signs highlighting the lane was covered by scaffolding but was unsuccessful.

Bristol City Council did not comment on whether the number of fines at the location were higher than in other bus lanes in the city.

A spokeswoman said: “All of our bus lanes are clearly signposted, as per Government guidelines, and display the hours of operation.

“This section at Totterdown Bridge is no different and enforcement of the restrictions still applies.

“It is vital our bus lanes are kept clear so we can provide an efficient and reliable public transport service for our busy city transport network to keep everyone moving.

“All income from penalty charge notices is used to pay for the cost of enforcement with any surplus being used for transport initiatives and improvements.”

She added that all drivers have the right to appeal. Some 815 people have successfully appealed their penalty charge notices near Totterdown Bridge since 2013.