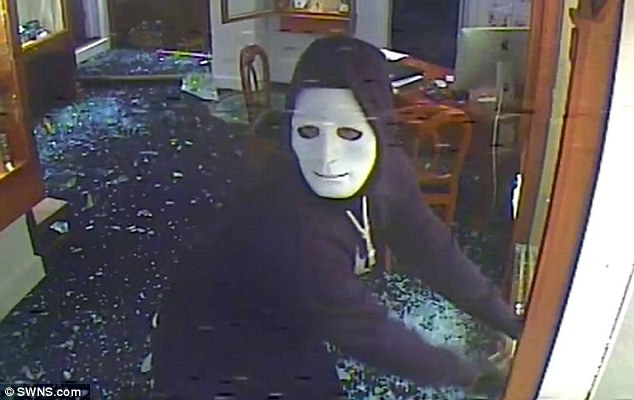 Police hunting an armed robber who held up a jewellers in a village where Harry Potter was filmed have released an e-fit – and he looks like one of MALFOY’S henchman.

The baby-faced ‘muggle’ blonde is thought to have been one of three masked robbers who burst into a goldsmiths in scenic Lacock, Wilts.

After threatening a member of staff, the trio smashed glass display cabinets with a crow bar and sledge hammer before making off with £100,000 of jewellery.

Police launched an investigation into the robbery, at Watling Goldsmiths, which destroyed the peace in historic Lacock on March 23.

The village is famous as a National Trust-owned picturesque spot often seen in TV and films including Pride and Prejudice and Downton Abbey.

Its iconic streets were used as a backdrop in the Potter films, with many of the interior Hogwarts scenes being shot at the 16th century Lacock Abbey.

The baby-faced youngster in the e-fit, which is being circulated by Wiltshire Police, was seen in the area – and looks young enough to be a Potter star.

He and his two cronies pulled up outside the jewellers in a white Ford Kuga, which they later ditched for a light blue Range Rover.

A member of public, who spotted the group before the smash and grab and before they covered their faces in masks, was able to describe the man’s face from memory.

Officers are now appealing for anyone who recognises him to get in touch.

The suspect is described as being white, aged between 18 and 20, of slim build and with brown hair.

Sergeant Paul Harvey said: “This was a terrifying incident for those involved and it has shocked the local, tight-knit community.

“I would like to reassure members of the public that we continue to carry out a robust investigation and enquiries are ongoing.”