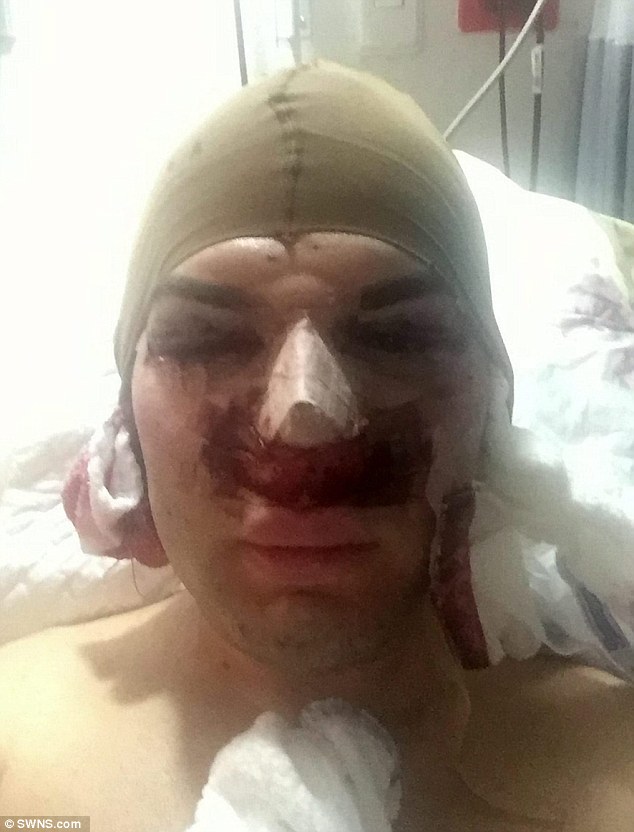 A plastic surgery addict who has spent 12 years and over £300,000 trying to turn himself into a real-life Ken doll is in hospital after his body REJECTED his new nose.

Rodrigo Alves, 32, has had 42 body-changing operations – including liposuction, six-pack implants and botox fillers – in a vain bid for his perfect physique.

The Brazilian-born air steward, who lives in London, had his SIXTH nose job in February as he looked for the ‘perfect’ face.

But his body rejected the cartilage used in the operation which came from a donor. A hole began to appear in his nose and his new septum appeared to come loose.

The hole slowly grew bigger until he began having trouble breathing and he was admitted to hospital in Malaga, Spain.

He is currently being treated there for necrosis after his skin started to DIE.

Medics have warned the infection could eat through his nose into his face – which could become gangrenous – and it may have to be removed.

He is receiving antibiotics from an IV drip every eight hours but is is desperate to fly back to the UK to continue his treatment.

Speaking from his hospital bed, Rodrigo said: “Now I need to start from zero again to get my nose reconstructed.

“I had my 6th nose job and the doctor used a cartilage from someone else to do my nose. It looked amazing.

“But when I thought that it was it and I would be done I got infected with a nasty bacteria which has been eating my nose cartilage.

“Basically now I look like a koala bear and I will have to start looking for a doctor who feels confident to work on my nose once it is healed after this infection.”

Flamboyant Rodrigo decided to go under the knife for the first time in 2004 after struggling with the way he looked since childhood.

He also indulges in twice-yearly Botox and filler top-ups and takes a cocktail of daily pills consisting of collagen tablets, anti-water retention and hair growth tablets.

He has also had the skin between his inside lip and gum cut to give him a wider smile and liposuction in his legs and back which was re-injected elsewhere in a bid to make him look younger.

Party-loving Rodrigo says he pays for the operations himself by working hard as a flight attendant, image consultant and event host.