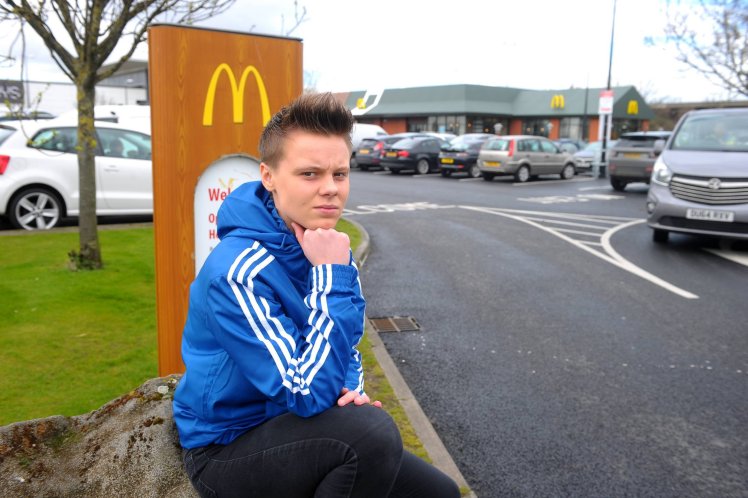 A 16 year-old lesbian claims she was asked to leave McDonalds for using the women’s toilets after staff mistook her for a BOY.

Short-haired Ny Richardson told a staff member who asked her to leave that she was a girl but was asked to show ID to prove her gender.

When she didn’t have any proof with her the worker told her to get out and rang the police.

Ny said: “I’m used to being accused of being a boy, but this time I was humiliated in front of the whole restaurant.

“I think his attitude was disgusting and I’m still angry about it now.”

She added: “I ordered my food and left it with my girlfriend as I went to the toilet.

“When I was in there, someone told me to get out and when I sat back down, the manager came over and told me that I needed to leave because I have been in the girls’ toilet.

“He then asked me to show some ID, but when I didn’t have any he told me to get out and he rang the police.”

McDonald’s said Ny was part of a disruptive group who went to the branch in Hull, East Yorks., and who were asked to leave after causing problems on Tuesday.

Police confirmed they were called to the outlet after a group of youths Ny was with became involved in an “altercation” with staff.

Ny insists she did not cause trouble and said it was not the first time she has been treated differently because of her appearance.

She said she came out as gay when she was 12 and has the full support of parents and friends.

But she said she gets abuse and on one previous occasion some women hit her with their handbags when they saw her in toilets.

She now resorts to using the disabled toilets whenever she can but it was occupied on Tuesday.

Her mother Leigh Richardson defended her daughter, saying: “She is who she is and people need to accept that.

“She shouldn’t have to justify herself to anybody.”

McDonald’s said: “We can confirm a group of individuals were asked to leave our St Andrew’s Quay restaurant, following several complaints about inappropriate behaviour.

“This group has been asked to leave the restaurant on numerous occasions over the past few days, culminating in the police being called on Tuesday evening. These actions have been taken due to unacceptable behaviour only.”

Humberside Police said: “Officers were called to the St Andrew’s Quay branch of McDonald’s following reports a group of youths were being abusive.

“An altercation had ensued between the youths and staff after a customer complained a person they wrongly believed to be male was in the women’s toilets.

“No complaints were made and words of advice were given to all parties.”