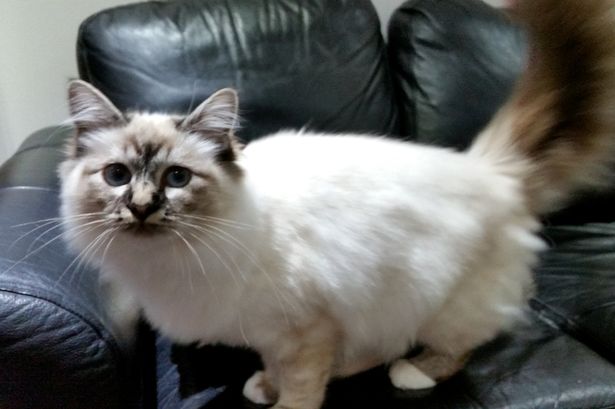 A nine-month-old kitten had a lucky escape after she swallowed a car aerial as long as her body.

It narrowly missing her vital organs before it got stuck and Sandie realised something was wrong when she saw blood around her mouth.

The grandmother-of-one rushed her to an emergency vet who operated to remove the aerial.

Sandy, 52, said: “I was putting her to bed at around midnight and I called her and she didn’t arrive.

“I saw her upstairs with blood around her mouth.

“I knew if I left her until Monday morning it would be too late so I took her to the vets there and then.”

Sandie, an admin assistant, drove ten miles in the middle of the night to get Li Shou to a 24-hour emergency vets, who thought the kitten had swallowed a small stick.

An x-ray revealed the aerial was wedged inside her and vets operated on her to remove it.

Li Shou was then fitted with a feeding tube for a week to recover.

Mum-of-three Sandie, from Burgess Hill, West Sussex, said: “The vet rang me back at three in the morning and said it was an aerial.

“The vets said they had never seen anything like this. When they showed me the x-ray I didn’t believe it.

“I don’t know exactly how it happened.

“I thought it was a Lego car aerial that my son had put together. I didn’t think for a minute it would have come off my car.

“She must have got it in her mouth somehow as there was blood on the front of the windscreen.

“If it had gone through her heart she would not be here now.”