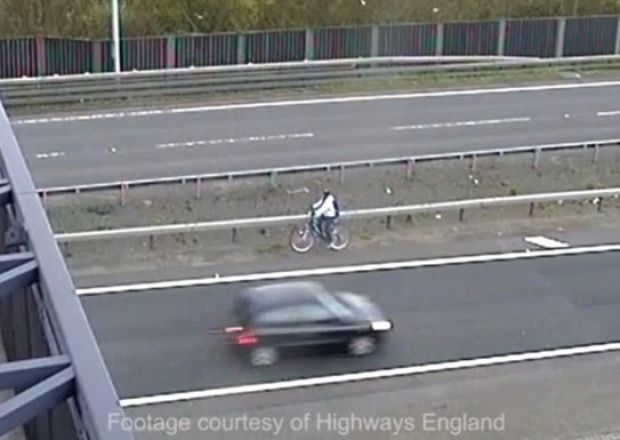 This is the moment a man is caught riding down Britain’s busiest motorway – on his pushbike.

The reckless cyclist was spotted on CCTV cycling dangerously along the hard shoulder of the M25 just before the rush hour started at 6am yesterday (Thurs).

He was escorted off the motorway by Highways England but he returned a short time later on slip road heading towards Terminal 5 at Heathrow Airport.

The idiot, in his 30s, was stopped a second time by highway officers and a police patrol who fined him £50, gave him strong words of advice and drove him away to safety.

Highways England manager Martin Crosswell said: “The actions of this man were irresponsible and could have caused a serious incident.”

Pc Tom Richardson said: “As well as cycling along an extremely busy motorway during the rush hour traffic the cyclist would have also crossed motorway slip roads so it is extremely fortunate that there was not a more serious outcome to his trip.

“The act of cycling on the motorway hard shoulder is clearly reckless and dangerous and the man not only put his own life at risk but other road users too.

“A cyclist coming towards you on your morning commute on the M25 would be completely unexpected and could cause alarm.

“If we get reports of people cycling on motorway we will intervene and further action may be taken.”