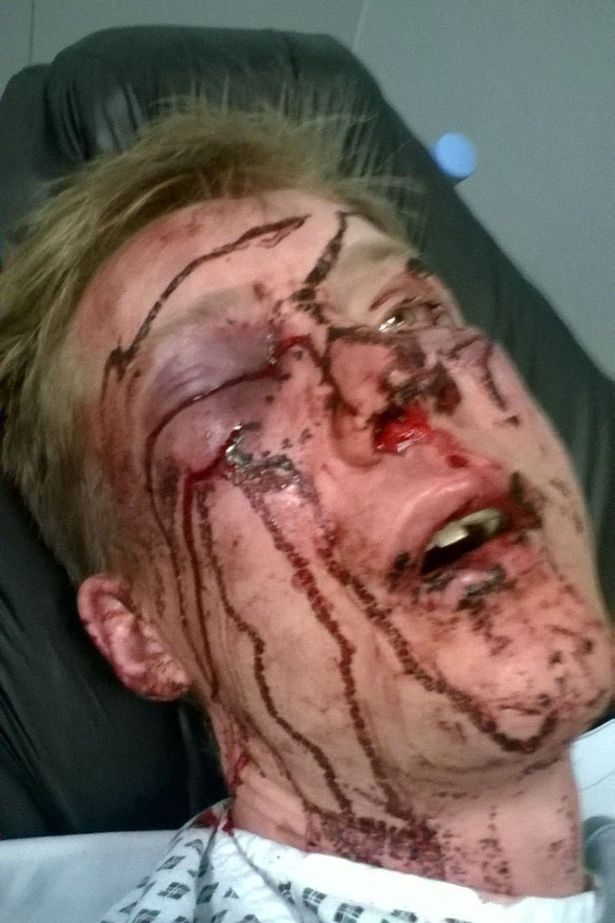 A dad-of-one was left covered in blood and fearing for his life after three brutal brothers beat him so badly his head swelled to the size of a football.

Daniel Chapman, who likened his attackers to “savage animals”, said the baseball bat attack at home left him drifting in and out of conciousness, with ringing his ears.

Shocking images show the 30-year-old’s covered in blood, with his eyes swollen and lips cut.

Luke Kirkby, 22, and his two brothers, Jamie, 19, and Harry, 20, were each jailed for five years last week for the beating of Mr Chapman on August 10, last year.

Speaking about that night, Mr Chapman, of Hull, East Yorks., said: “I looked like the devil possessed after they had finished with me. I looked absolutely terrible.

“My head swelled up to the size of a football and that’s no exaggeration. I was covered in blood from head to toe.

“I was in fear of my life that night. I actually believed I was going to die.

“I remember telling them that I’d had enough, but they just carried on. They were just like savage animals.

“It was not until my mum turned up that they left.”

The assault took place outside the flat Mr Chapman shared with is mum.

He added: “You hear the expression, ‘to beat someone senseless’. Well, let me tell you – it actually exists. After a while, I didn’t feel anything.

“I saw flashes of light and had ringing in my ears. I was drifting in and out of consciousness.

“It was about 30 minutes after the attack that the pain kicked in. That pain was excruciating.”

On that fateful night Mr Chapman answered his door at 1am as his three-year-old daughter slept upstairs.

He was confronted by his former girlfriend, who barged past and took their child, her new partner, Luke Kirkby, and his two brothers.

Hull Crown Court heard a text message had been misinterpreted and the woman had believed Mr Chapman was no longer willing to look after their daughter on another evening.

Disturbingly, as he was leaving the scene, Harry Kirby sent a number of boastful texts describing the violence, a court heard.

One read: “Just literally ripped a man’s eyebrow and eyelid off, his lips, his cheeks, with mine and Jamie’s bare hands.”

Another read: “I have never in my life seen so much blood pour from a man. It literally LITERALLY covered the road.”

He also boasted: “I smell of his blood.”

Mr Chapman was rushed to Hull Royal Infirmary, where he had 13 stitches to his eye.

The court heard his lower right eye socket was smashed, which was “conservatively” treated, although he may need surgery in the future.

Despite his injuries, Mr Chapman said the biggest impact of the attack has been on his family life.

“I couldn’t see my daughter for a month,” he said. “I couldn’t let her see me like that. That really hurt.”

Because of his injuries, Mr Chapman had to quit his job as a tyre technician and now works as a bench hand for Marble Building Products.

“This would never have happened if my ex-girlfriend had just stayed at home that night,” he said.

Harry Kirby, of Bielby, Jamie Kirby, also of Bielby, and Luke Kirby, of Market Weighton, all pleaded guilty to causing grievous bodily harm with intent and possession of an offensive weapon.

Barristers for each of the described them as , hard-working and previously law-abiding young men.

But Mr Chapman says he finds this description of the brothers, together with messages in support of them on Facebook, deeply insulting.