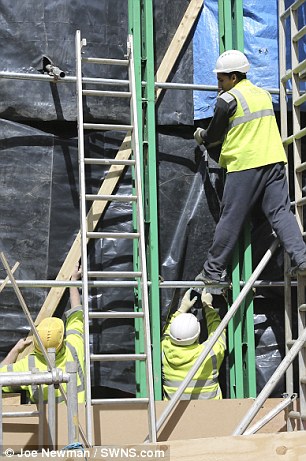 A property owner who painted her £15m house in red and white stripes is demolishing the building, it was revealed today.

Zipporah Lisle-Mainwaring, 68, painted the Kensington terraced house to get her own back on neighbours who objected to her planning application to build a huge ‘iceberg’ basement.

After a series of planning battles she was ordered to repaint the building – but has appealed that decision.

Now, she has begun demolition work to convert the house, but faces yet more protest from her neighbours, despite being granted planning permission by the planning inspectorate.

Work began to demolish the building on March 22.

Many people living on the small residential street have voiced their concerns that as she is not a permanent resident Ms Lisle-Mainwaring, who spends half the time living in Geneva, has no idea of the nuisance she is causing.

Complaining about the noise one neighbour said: “Well, have you heard it? I don’t want to say anything more.”

Despite neighbours frustrations there is no ban preventing Ms Lisle-Mainwaring from commencing building work on the site, which is in full flow.

Builders were covering the front of the terraced home in tarpaulin as drilling could be heard from inside yesterday (Tues).

One of the builders said: “We are taking down the front of the building and carrying out strengthening work on the sides.

“That’s all we can do at the moment.”

He said neighbours had ‘not really’ complained about the noise.

He said: “Of course some are upset about the noise but we aren’t doing anything we haven’t been given permission to do by the council.”

“We are OK to take out what we have done from the inside.”

Ms Lisle-Mainwaring bought the townhouse in 2012 when it was officially classified as office space, but she successfully changed it into storage premises.

Then she submitted a planning application to convert the property for residential use complete with double-storey basement.

The application was originally refused, overturned at appeal July 2014, but then quashed at the High Court.

A spokesman for Kensington and Chelsea Borough council confirmed that permission had now been granted to demolish the building.

He said: “Planning permission for the demolition of the building at 19 South End was granted on appeal by the Planning Inspectorate last February.

“There were no pre-commencement conditions attached to the planning permission.”

The spokesperson said that as of yet they had not received any official complaints about noise from the building work.