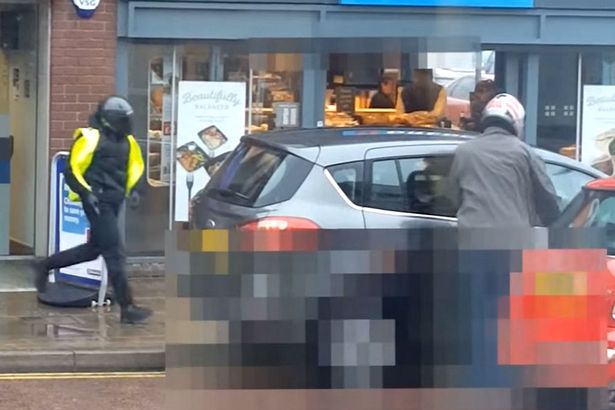 This is the shocking moment an onlooker filmed two armed robbers fleeing from a building society, just seconds after threatening staff with a knife.

The quick-thinking bystander captured the dramatic footage on his phone, as the criminals ran out of a branch of Nationwide in Wigston, Leics.

The men, who were wearing wearing motorcycle helmets, raided the building society at 11.15am on Wednesday last week (11/5).

Just moments before, the pair had pulled a knife on terrified staff, ordering them to hand over cash.

The 16-second clip shows the two men fleeing empty-handed from the branch, one at a time, and jumping into a dark grey Ford MPV-type car parked on the pavement.

Luckily, no one was injured during the raid.

The witness passed the footage onto Leicestershire Police, who have now released the video in a bid to catch the perpetrators.

Detective Constable Eliot Burgess said: “We hope by releasing the footage someone may remember seeing something of significance.

“Did you see two people acting suspiciously around the premises or do you recognise the vehicle?

“The vehicle was displaying false registration plates which may have since been changed again.

“If you can help with any aspect of the investigation then please contact us.

“Also if you were in the Leicester Road area of Wigston during the morning of May 11 and haven’t yet spoken to the police, get in touch.”

Liberal Democrat councillor John Boyce, leader of Oadby and Wigston Borough Council, said the raid was “worrying” as it followed a similar attack on the Ladbroke’s betting shop in South Wigston last month.

Cllr Boyce said: “The simple fact is that the best way to stop crime is to catch the people who commit it.

“I would encourage anyone who knows anything about this crime to contact the police and tell them what they know.”

Anyone with any information is urged to call Det Con Burgess on 101, quoting crime number 115681.