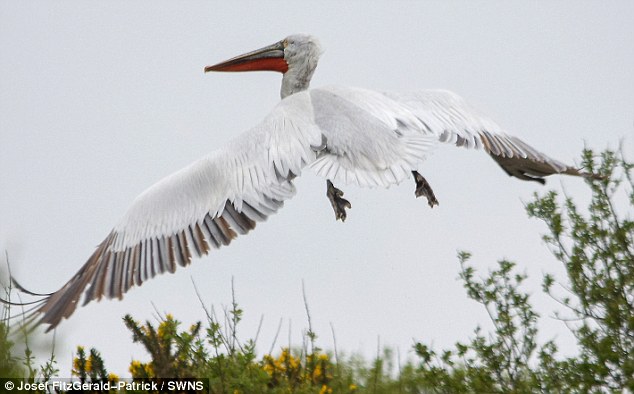 A huge pelican – the largest of its kind and one of the biggest birds in the world – has been spotted in the UK for the first time in centuries.

The giant Dalmatian Pelican, whose wingspans measure up to 11 and a half feet, is thought to have been carried here on last weekend’s humid weather from Europe.

The red-billed bird, native to Eastern Europe, Russia and Asia, was first seen on Saturday at Gwithian in Cornwall.

On Monday it had reached Sennen and Polgigga between Land’s End.

It was photographed at Sennen by teenage birdspotter Josef FitzGerald-Patrick, 15, who heard it had arrived near his home town.

The schoolboy cycled to the scene armed with his camera and caught a spectacular shot of the pelican taking to the air, displaying its giant wings.

Excited Josef said: “I heard about it on the website Rare Bird Alert and I spent three hours searching all the locations that it was being sighted at.

“Finally my local knowledge helped me and some others down to a small pool behind Sennen Caravan Park.

“We walked very quietly down to the pool but saw nothing.

“I then saw this gigantic red bill move slowly across from the left-hand side and as soon as it saw us took off.

“Luckily I had my camera focusing and panning with the bird as soon as it took off so got the shots of it flying over the willow.”

Josef, from St Buryan, Cornwall, was with around 20 other bird enthusiasts who saw the rare visitor.

The same bird is thought to have previously visited Poland between 6th-11th April, Germany on 16th April-1st May, and eastern France on 3rd May.