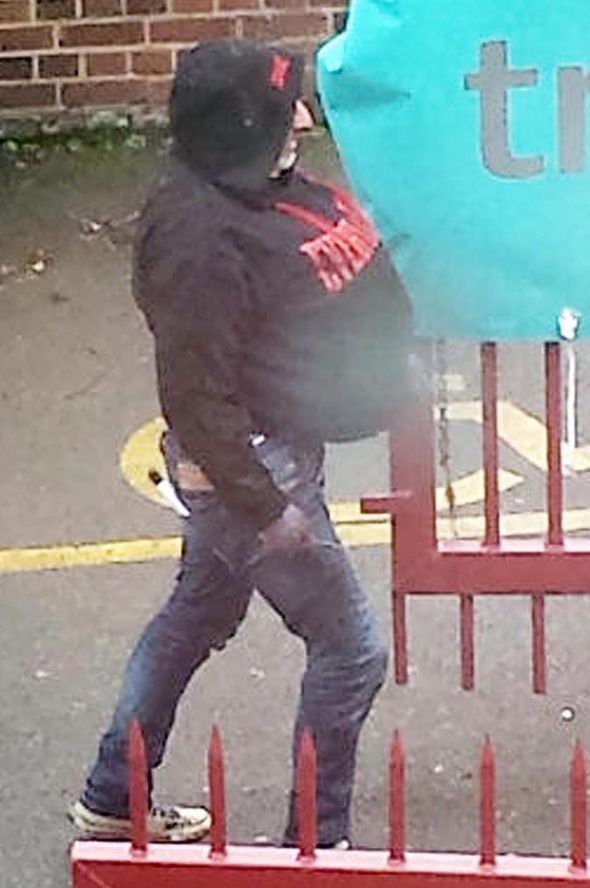 A company director who brutally stabbed his heavily pregnant girlfriend after being “driven mad” when he was forced to choose between her and his Muslim mother has been jailed for 18 years.

Evil Babur Karamat Raja, 41, launched the horrific assault on Natalie Queiroz, 40, who only survived the attack because of her BREAST IMPLANTS.

He stabbed Ms Queiroz with a large kitchen knife – which had a 12ins blade – in her chest and stomach before trying to slash her throat and wrists.

Five have-a-go heroes who witnessed the broad daylight attack near the centre of Sutton Coldfield, West Mids., eventually managed to wrestle him to the ground.

Ms Queiroz, who was 37 weeks pregnant, was airlifted to Birmingham’s Queen Elizabeth Hospital and had a baby by caesarean section hours later.

She was left her with 24 knife wounds and doctors told her that her baby would have been killed if the knife had gone just two MILLIMETRES further into her abdomen.

The court heard Raja had known Ms Queiroz since their school days and the pair started a relationship in October 2014.

They moved into a £400,000 home in Sutton Coldfield together and she became pregnant with their first child last summer.

But a court heard Raja’s strict Muslim mother disapproved of the relationship and forced him to choose between her and Ms Queiroz.

Raja also felt under pressure to provide financially for his partner and had promised to transfer her £36,000 when she went on maternity leave in February this year.

He made a number of excuses why the money hadn’t been paid into her account and arranged to meet her at a bank to transfer the money at 3.30pm on March 4 this year.

He also phoned Ms Queiroz to ask which way she would be going into town and disguised himself by putting a rucksack under his hooded top to make himself look fat.

Chilling pictures released by police yesterday (Thurs) show Raja moments before he launched the attack with a knife sticking out of his back pocket.

Raja, who was known as Bobby and was the director of a car repair business, was arrested at the scene and admitted the attack to doctors at a nearby police station.

He pleaded guilty to attempting to murder Ms Queiroz, attempted child destruction and possessing a knife in a public place at a previous hearing.

Raja, of Sutton Coldfield, also admitted unlawful wounding and assault occasioning actual bodily harm relating to two of the brave heroes who intervened in the attack.

Yesterday (Thur), Raja, who wore a smart navy suit with a white shirt and blue striped tie, was jailed for 18 years at Birmingham Crown Court.

Sentencing him, Judge Simon Drew QC said: “This was an horrific, pre-meditated knife attack on your partner and your unborn child.

“I take the view they were clearly carefully planned offences. This was no spontaneous meltdown, it was a deliberate act.

“It’s clear to me that what brought these matters to a head was not only Ms Queiroz’s pregnancy but the financial crisis which was beginning to engulf you in that you had made promises that you were not able to keep and you were about to be found out.

“You realised you had do something about it and on the day of the attack you formed a plan and realised that an opportunity would arise when she said she would walk from her home to the bank.

“During that conversation when you asked her to described her route and she innocently described you as sounded like a stalker, you really were.

“It’s clear that you felt under great stress because your mother was not prepared to accept your relationship with Ms Queiroz and you were being forced to choose between the two.

“What happened in this case was that once you choose your mother over your partner and child you resolved not merely to terminate your relationship but to terminate them.”

Another group of teenagers managed to pull Raja off her, including one who kicked him more than 20 times before police arrived and he was arrested.

The judge added: “I think it right to commend the actions of all the members of the public who risked their lives in order to intervene in and stop your merciless attack on Ms Queiroz.

“Had they not intervened I have no doubt that you would have succeeded in killing both mother and child.

“They should receive public recognition.”

The court heard Raja was “driven mad” by being forced to choose between his Muslim mother and “chosen life partner” Ms Queiroz.

Jane Humphryes QC (corr), defending, said his family had already been torn apart when his brother was exiled for marrying a Hindi woman.

“The defendant is religious by birth but he is non-practising. He describes himself as an atheist.

“His mother was deeply troubled by him engaging in a relationship with a non Muslim woman.

“Such was the (family) rift he was still returning home to his mother, she knew nothing of the pregnancy.

“The urgency of the pressure put on him was increasing day by day.

“Mr Raja was driven to distraction by the devastation that was taking place within the family.

“He could not find a way in his heart or his head of having to choose between his much loved mother and his partner Ms Queiroz.

“She (his mother) had told him that he must leave her (Ms Queiroz) and she would not be in contact with him otherwise.

“It literally drove him mad.”

The court heard Ms Queiroz, who was in court and wept throughout the hearing, only survived the attack because of her £5,250 breast implants.

Describing the attack, prosecutor Benjamin Aina QC said: “She heard footsteps behind her at a rapid pace.

“An arm reached from behind her and grabbed her upper body.

“She shouted ‘get off me’, she saw a knife came over her shoulder and she was repeatedly stabbed in her chest area.

“Ms Queiroz managed to break free and it was at this stage she saw her attacker was Mr Raja.

“He grabbed her head and was trying to cut her throat. Ms Queiroz was shouting ‘don’t kill me, I’ve got children’. She was begging him to stop.

“Other members of the public tried to stop him but to no avail.

“The bra together with the breast implant is probably what saved this lady’s life.”

The court heard her baby, which was born weighing 5lbs 4oz, was put on a ventilator and could suffer from brain damage as a result of the attack.

Mr Aina added: “The hospital have stated that had the knife entered the abdomen 2mm in it would have killed the baby.

Ms Queiroz was left with a large horizontal stab wound to her upper abdomen and a vertical scar from the Caesarian section.

She had other stab wounds to her chest which had ruptured both her breast implants, her diaphragm and her lung.

The court heard she was also treated for lacerations to her right arm and left wrist which has required surgery and regular physiotherapy.

In an emotion victim impact statement, which was read out in court, Ms Queiroz said she felt “ugly” every time she looked at her 24 scars in the mirror.

Reading the statement, Mr Aina QC said: “I have been left feeling destroyed and betrayed.

“I have horrific flashbacks to the actual attack. I also have nightmares affecting my sleep.

“I’m scared extensively across my body, massively affecting my self-esteem.

“I’m ashamed of my body. I openly weep when I see my body in a mirror as it looks to me horrific.

“I have been left feeling ugly and the scars remind me daily of what happened and always will.”

Ms Humphryes also read a letter written by Raja to the judge where he apologised to Ms Queiroz.

He wrote: “I would like to say that I take full responsibility for my actions.

“I have nothing but complete remorse and apologise for the pain and suffering that I have caused.

“I was overwhelmed by the convergence of several events, the pressure I felt over the negative feelings of my mother and the lack of expected funds from my business.