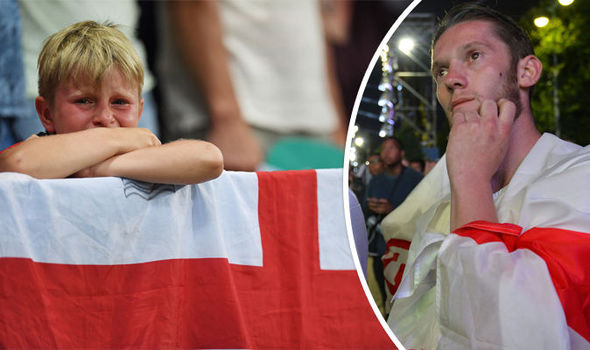 Delirious Iceland fans said it was ‘Brexit all over again’ as they watched the rank outsiders send England crashing OUT of Euro 2016.

Dozens of Icelanders had gathered with painted faces and wearing shirts and scarves at Tommi’s Burger Joint on the Kings Road in Chelsea, west London.

Celebrating their famous 2-1 win, the Icelandic fans held up their flags, jumped, hugged and chanted in the basement of the bar.

Their wild celebrations were fuelled by free beer as the landlord kept to his pledge of serving everyone a free pint every time the mighty minnows scored.

The delighted Icelanders were unable to contain their happiness as they spilled out onto the famous street chanting and cheering.

Siddy Ingolfs, an Icelander who has lived in London for seven years, said: “I’m elated.

“It’s like we just made history. If not football history, then definitely Icelandic history.

“This result will be remembered for generations

“It’s like Brexit, Iceland is not in the EU and yet we just beat England.

“And it just goes to show a nation divided has trouble, whereas a nation united wins football matches.”

But Spud, an English Chelsea fan watching the game, said: “We’re out of Europe twice in one week. I can’t believe it.”

“This result will be remembered for as long as the EU referendum. I’m embarrassed to be English.”

As both teams filed on after half time, Iceland fans turned their attention from free beer to the second half England attacked with velocity.

The room filled up and it became standing room only as the underdogs fought to maintain their 2:1 lead.

As Iceland almost scored with a flowery bicycle kick the room simultaneously held their head in their hands.

Watching the game with a huge smile on her face Nanna Asgeirsdottir (CORRECT), 29, said: “I am so so proud.

“It’s just brilliant plus my boyfriend is English so he’s almost crying in the corner.”

Struggling in the 60th minute as Hodgson brings on Jamie Vardy, two Brits announce they are supporting the rival team because all English players are w******.

One lad said: “What I love about Iceland is that all their players are normal people. Their manager is dentist. It’s brilliant.

As the final minute whistle came ever closer the chanting, clapping and cheering became ever more intense.

After every failed England attack the elated Icelandic supporters laughed and cheered, chanting “Rooney, Rooney” every time the millionaire footballer launched the ball metres above the woodwork.

The supports clapped in unison as an Icelandic victory came ever closer.

Many were biting their nails and sharing looks of disbelief as England missed multiple chances to equalise.

The manager of Tommi’s couldn’t resist taking a few moments away to watch her team as they thrashed the Brits.

She said: “There’s still eight minutes to go and even on a bad day we can still lose to a team like England.

“We want to go further. We are here to stay.”

Reflecting on the result England fan Tony Jordan, 37, said: “England need to play like a team.

“We invented this game and yet we haven’t won anything real since 1966.

“Our goalkeeper is paid more than most of their players but they still win. We need to reevaluate our priorities.”