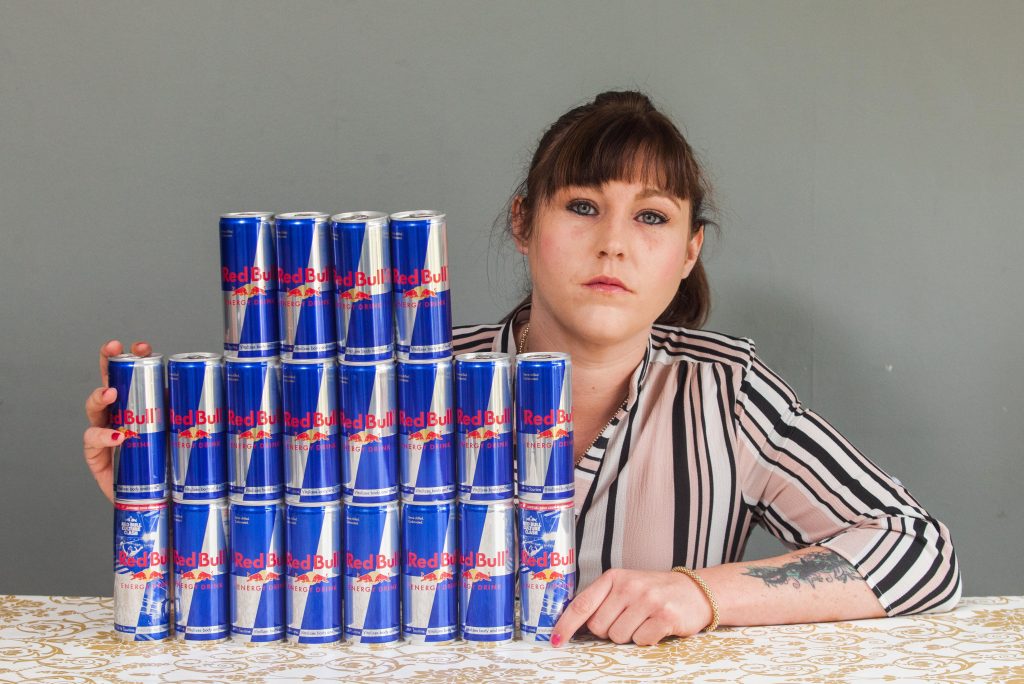 A Red Bull addict who downed 20 cans a DAY damaged her liver so badly doctors thought she was an alcoholic.

Mary Allwood, 26, was necking the daily equivalent of 16 Mars bars worth of sugar and as much as caffeine found in 17 cups of coffee.

The mum-of-one would stash the cans all over the house and search daily for the best supermarket price deals, forking out more than £2,300 a year on the drinks.

But she was forced to face her addiction when she was admitted to hospital with pain, and an MRI scan revealed her liver was TWICE the normal size.

Worried doctors were convinced she was an alcoholic until teetotal Mary confessed to her Red Bull addiction.

She went ‘cold turkey’ five months ago and a test last week revealed her liver is now back to normal.

The full-time mum from Brixham, Devon, said: “I needed it and I didn’t care at the time what damage it was doing to me.

“If I didn’t get my fix I would be miserable and grumpy and it just wasn’t an option – I would make sure I got it.

“At first I would feel as if it would give me a buzz and energy, but eventually it wouldn’t give me energy – I just needed it.

“I needed the taste and fizzyness. It was my heroin. I would feel awful if I didn’t have it.

“Now the thought that anyone can go to the shops and buy it makes me so worried. I think it should be treated as if it is alcohol and cigarettes.”

Mary tried the caffeine drink for the first time was she was aged 22 in a bid to give her a bit more energy.

Initially it worked, but within just four months she was drinking up to 20 cans a day, necking at least two as soon as she woke up at around 8am.

“If I didn’t have any in the fridge I would walk to the shop and get two,” she said.

“I’d drink the first one in three sips, and then try and make the second one last longer.

“I would go to the supermarket and get ten multipacks at a time. I’d tell the person at the till that I had a restaurant and buying them for that reason.”

Her weight shot up from a size 16 to a size 24, and she wasn’t drinking anything else apart from Red Bull.

Even an episode of heart palpitations a year after her habit began didn’t halt her drinking.

But in November 2015, she had extreme pain in her liver and she was rushed to hospital in an ambulance.

An MRI scan revealed her liver was twice the size it should be, with two fibrous lumps – the size of a grape and a satsuma.

Prologned intake of excessive alcohol can cause inflammation of the liver and may contribute to fibrosis, leading to cirrhosis.

But also a diet laden with sugar can lead to build-up in the liver, which can cause it to become dramatically inflamed and develop of scarring and lumps.

“They kept talking about alcohol and asking how much I drank,” said Mary.

“They said my liver looked the same as someone who was an alcoholic and that’s when I said I drank at least 12 Red Bulls a day.

“They looked at me in disgust.”

It was the shock Mary needed, and she went on a meal-replacement diet, swapping her Red Bull for six and a half litres of water a day.

She experienced withdrawals for around a month – mood swings and shakes – but now no longer craves the drinks.

“It was really hard and there were times when I bought one, opened it, but I never drank it,” said single Mary, who has a daughter, Berivan, aged three.

“I tried a drop on my tongue and it tasted like pure sugar. I’ll never go back to how I was now.

“Now I think the rules should be changed and it should be treated in a similar way to cigarettes, with the blank packaging.”