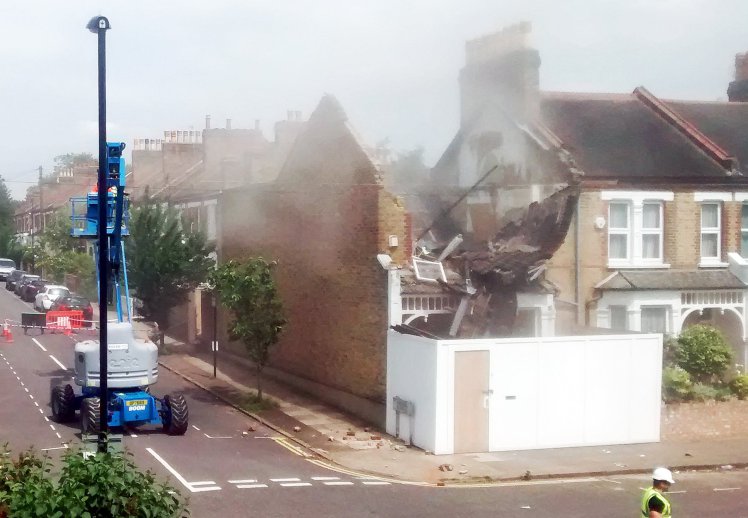 This is the moment the roof of a Victorian home being renovated as an investment came crashing onto the street.

A video captured by a local builder – who was not working on the property – shows the roof caving in before it pushes the upper storey to the ground.

Dust and brickwork covered the pavement in Lampmead Road, Lewisham, south east London, when the end-of-terrace house fell at around 1pm today (Weds).

The property was being renovated by builders for an investor and nobody was living in it at the time, neighbours said.

Jimmy, a 32-year-old builder working on a nearby property, said the building began to sag at around 9pm on Tuesday but neighbours heard a terrifying creak more than 12 hours earlier.

He said: “Neighbours said they had heard creaking noises coming from it the yesterday morning at about 6.30.

“People came out looking but nothing happened then.

“Then later we were about to leave work but we stayed for a while to see what would happen.

“Yesterday night at 9 o’clock the roof went to the side like it would collapse and it pushed the front out and looked like it was going to come down any minute. The fire brigade were here and everybody.

“The builders had removed all the ceiling posts and took the rafters down. I thought there’s nothing in that roof, it’s going to go.

“I went home and came back to work today. It was just after one pm when it collapsed.

“We were just standing there and a cherry picker was coming down the road, they were going to try and take the roof down so it didn’t collapse but as soon as they tried to go up the whole thing collapsed.

“One guy was a bit close, he had to run away.

“I’ve worked on building sites for 17 years but I have never seen a house collapse like that – it’s crazy.

“Luckily, no-one was inside, it was just an empty property.”

Jimmy blamed the collapse on “dodgy builders” who he said had been removing beams and rafters while the roof was still on the property.

He said: “There was no sign to say who the builder was.

“It was definitely dodgy builders – you can’t bloody start taking rafters down before you take the roof off.

The next-door neighbour was evacuated by police the night before the collapse.

One neighbour said: “Someone bought it as an investment – some investment that is now.

“The woman next door is 80-odd years old. They moved her out yesterday and she is staying with a friend who lives opposite.”

Lewisham Council is yet to respond to a request for comment.