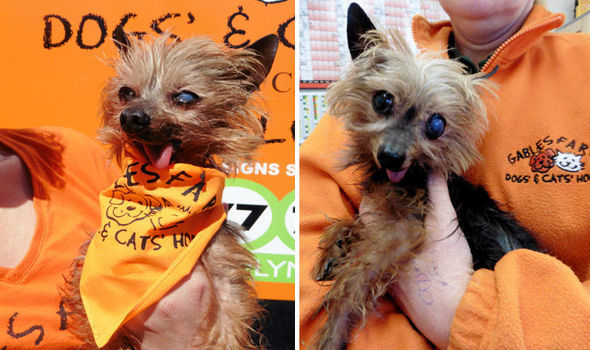 Britain’s most poorly pooch has been given the name SHIPWRECK after being found on a beach with a whole raft of health problems.

The Yorkshire Terrier has a missing jaw, no teeth, alopecia, inflamed skin, glaucoma in his left eye and is severely underweight.

If that wasn’t enough for him, he now faces castration.

He was found on Whitsand Bay, Cornwall by the RNLI and taken into the local council’s kennels for strays.

When no-one claimed him after seven days he was signed over to Gables Farm rescue centre in Plymouth, Devon where they named him Shipwreck.

He faces extensive treatment and surgery before he can be re-homed.

Half his bottom jaw is missing and he has no teeth, which has made it difficult to age him, but he is estimated to be around six years old.

He is currently having medicated baths to treat his alopecia and inflamed skin.

He also being given having eye drops to treat his Glaucoma, but if this is unsuccessful he will have to have his eye removed.

Deputy Manager Ruth Rickard said: “We have named this little chap Shipwreck after he was found on a beach and he was such a wreck.

“It was shocking to see this little dog in such a poor state when he arrived, but we will do everything we can to ensure that he will have a happy future.

“He has such a fantastic loving temperament.”

It is estimated that it will cost the home in excess of £500 to treat all his health problems and ensure he can live the rest of his life pain free.

The home, which has a non-euthanasia policy, has now launched a fund raising appeal to try and help Shipwreck.