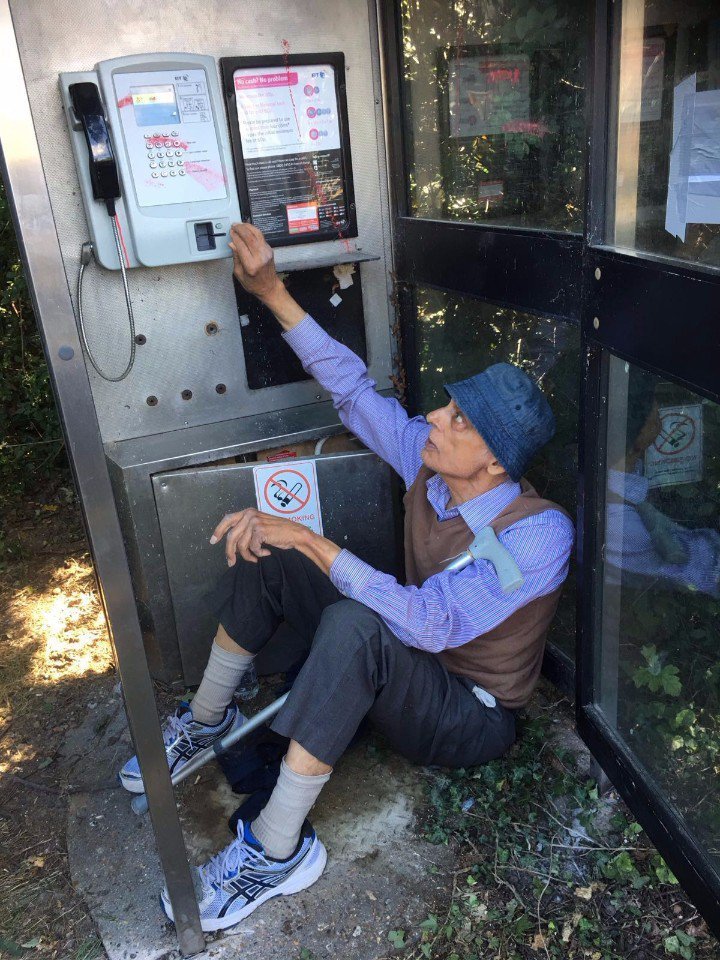 An aggravated pensioner yesterday (Mon) performed a sit-in protest in a public telephone box after BT brought to light plans of removal.

Essex resident, Rashid Obi wasn’t overjoyed when he caught wind that BT was going to scrap the box in Great Burstead, after it was previously set-up for emergency use only.

Feelings towards the decision were negative among villagers, who launched a petition calling for the box to be saved – which was only signed by 12 people.

But BT didn’t change their plans and contracted workers turned up yesterday (Mon) morning and began to dismantle the box.

Mr Obi, who walks with a walking stick, decided to take matters into his own hands and as a last resort, made a desperate attempt to save the box. Despite him promising to stay until BT called the operation off, he was eventually escorted away by police.

His partner Phyllis Brooks said: “It’s been there for 60 years. When they left it as an emergency use, we thought it was a good idea.

“We have gone round the village and I have got all the signatures.”

Mr Obi’s protest was dangerous and unconventional, involving him himself getting inside the box when contractors were cutting it apart.

Phyllis said: “There have been sparks flying, he could get hurt.

“(But) he wouldn’t move. We’ve got a right to protest.

“They said it’s dangerous for him to be there, they were trying to get him away.”

Phyllis claimed contractors have made threats to charge Mr. Obi £1,000 for prolonging their job and wasting their time.

Stewart Bartlett tweeted: “In these turbulent times, the stand taken by Rashid gives me hope #prayforrashid”

Conservative councillor for the Burstead ward of Basildon Borough Council, Andrew Baggott, said: “I had a phone call from residents this morning because they had been in communication with John Barron’s office about it.

“They rang because they had suggested to contact a local councillor as well.”

Councillor Baggott said that he had previously spoken to villagers, but only half-an-hour later he found answerphone messages saying that contractors had turned up.

He said: “I had a couple of calls from them saying ‘we’re going to support him’.

“My understanding from John Barron’s office is that the phone box has not been used for over three years.

“In the greater scheme of things to pressure BT to keep a phone box for emergency calls that has not been used for three or four years could be a tall order.”

The box remains balanced on one leg after workers removed the three others.