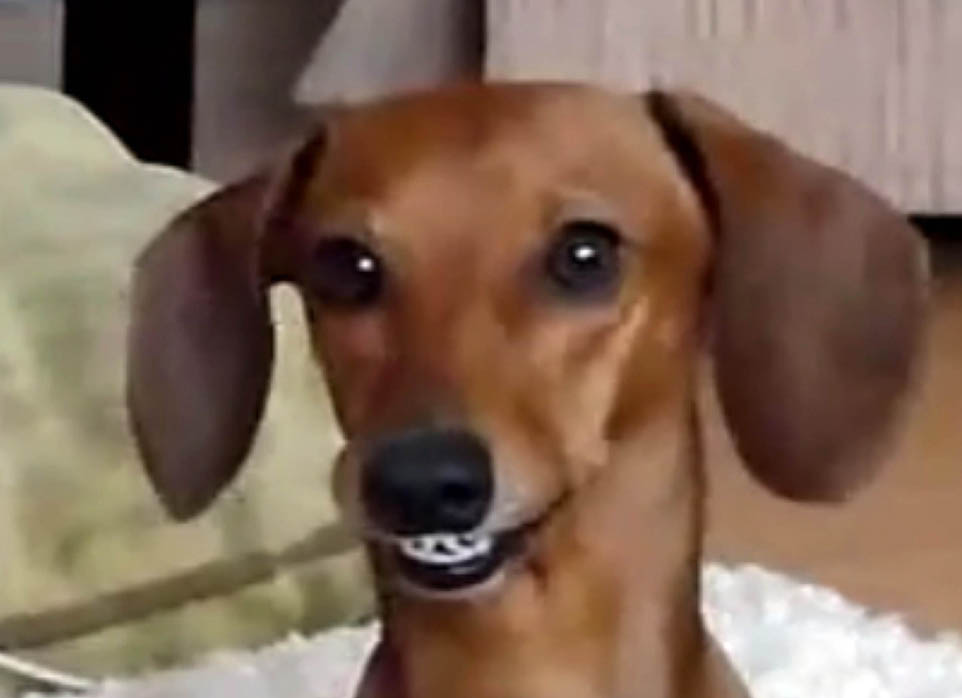 COULD this be the happiest dog in the world?

Kalea, a five-year-old Dachshund, flashes her owners a massive human-like grin every time she looks up while playing with her favourite toys.

Owners Jennifer and Kelly Marce, who live in Saskatchewan, Canada, say she has been smiling ever since she was a puppy, having owned the dog since she was just nine weeks old.

“She is an extremely happy dog,” said Jennifer. “I’ve grown up with dogs and Kalea is by far the happiest dog I’ve ever had.

“Her tail just wags non-stop and she loves to play with her ‘babies’ [the stuffed animals given to her by the Mr and Mrs Marce] and balls – she would play fetch non-stop if we let her.

Kalea is not just a performing dog, taught to smile for the cameras, Jennifer says they cannot get the her to smile at their request.

She doesn’t smile on command,” said Jennifer. “But it tends to happen when she’s excited – playing with her toys or when we say things that make her happy like being in the car or eating chicken.”

The gleaming white of the smile comes from the couple’s rigourous dental hygiene regime with the dog. They brush her teeth regularly – up to three or four times every week.

Kalea’s personality is not just down to the type of dog that she is. “We have another miniature dachshund, Mijo, who is six,” said Jennifer.

“Mijo has a completely different personality than Kalea – he is very serious and not really a playful guy.

“Despite that the two dogs are very, very close. They lay together all the time and are  both very loving. ”

And it’s not just the amazing grin that Kalea uses to show off her happiness, often smothering her family with kisses.

“When Kalea gets really excited about something, she starts kissing like crazy,” Jennifer said.  “It makes us laugh, which makes her even more excited and she tries to smother us in kisses.

“She often kisses Mijo on the mouth when she’s excited, which is quite the sight as he’s not really a kisser – he lets her do whatever she wants though.

“Kalea is our early bird,” added Jennifer. “She’s up at the crack of dawn every day, raring to go.

“As soon as she knows someone’s awake, her tail starts going and she’s ready to start the day. Mijo, on the other hand is a bit like me – we like to sleep in and are a bit cranky if people wake us up to early.