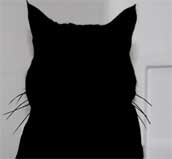 THEY say super injunctions are the preserve of the rich and famous, but one animal charity has taken one out to protect their very own Max Meow-sley.

Charity Cats Protection has taken the unusual step to prevent revelations from the cat’s past being revealed to an unsuspecting public.

The unneutered male catanova is suspected of a string of affairs with a numerous female cats over his short life so far leading to numerous love-kittens he now has nothing to do with.

However, the charity say they are keen to protect the cat’s reputation as he is now a ‘neutered, reformed character, determined to put the past behind him.’

Danielle Hart, manager of Cats Protection’s National Cat Adoption Centre in Chelwood Gate, Sussex, said: “He, who shall remain nameless, was brought to the charity in April after he was found wandering as a stray in Sussex. He’s around five years old and in that time it’s likely he would have been intimate with numerous feline partners.”

Beth Skillings, Cats Protection’s Clinical Veterinary Officer said: “An unneutered male cat can have a huge territory roaming many miles in search of a receptive female.

“Dependent on male competition, available resources and the number and distribution of unneutered females in his territory, it is likely that this robust cat may have fathered the litters born to ten females each year, meaning he could have been responsible for over 900 illicit kittens over the course of his life.”

Danielle added: “That’s a scandalous number of kittens so we feel quite justified in using a super-injunction to protect this cat from tabloid attention. However, we recognise there is every risk his identity could be exposed via Twitter.”

With many cats going unneutered, kittens are being raised across the country with no chance of any kitten-care being paid by the father.

The charity is calling for more cats to be neutered so that no more need to have their identities hidden from the harshness of press intrusion in their lives.