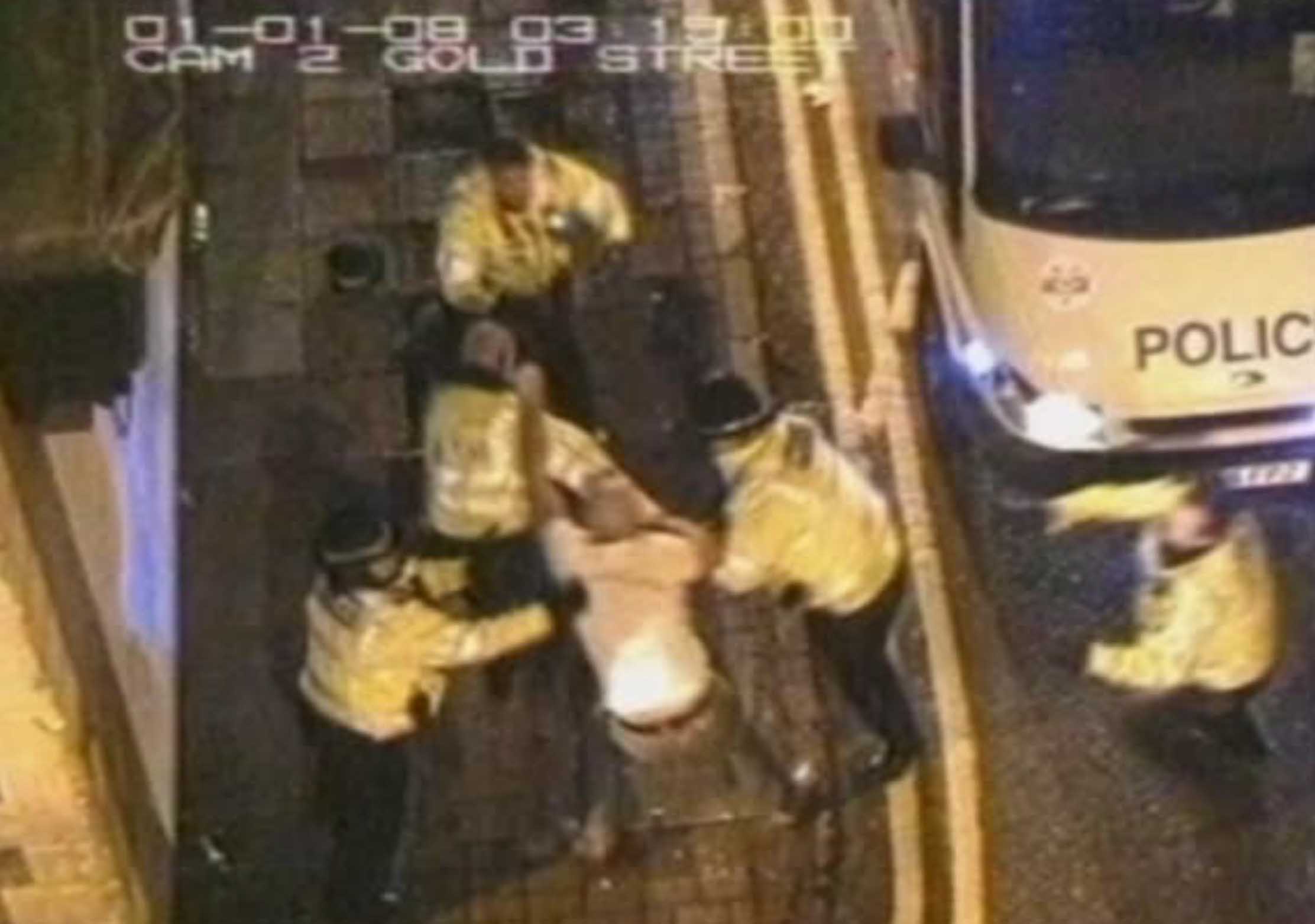 Committing benefits fraud this man who claimed he couldn’t walk without the aid of a stick was caught out after being captured on CCTV brawling with police officers in the street.

Scrounger Timothy Harris, 46, claimed he was unable to leave home without a walking stick but was pictured fighting with up to 10 officers in a drink and drug fuelled street-brawl.

The former soldier can be seen scrapping with police, flooring a woman as well as lashing out at members of the public during a New Years Eve night out in 2008.

It had taken 10 officers to subdue the thug during the 15 minute drink and cocaine-fuelled rampage through Northampton at 3.15am in the early hours of New Year’s Day.

But at the same time Harris had claimed benefits – in total GBP21,438.66 in disability allowance, council tax and housing benefit between January 2006 to November 2010, a court heard.

Handing down a 15-month prison sentence at Northampton Crown Court, Judge Bray said: “If you started claiming benefits on the basis that you could hardly walk and your busy seen running on the street, that is an outrageous fraud on the social security.

“There are some aggravating features here, mainly that when he declared he is seriously injured and can’t walk, when on the contrary he is fighting in the street and walking and running.”

He continued: “You had been claiming disability allowance on the basis that you could had an injury that made it almost impossible for you to walk. In fact you were caught on CCTV in the midst of an affray on the street after drinking and taking drugs while you were seen to be participating in an affray.”

Harris pleaded guilty to three charges of failing to notify any change of circumstances by fraudulently claiming more than GBP21,000 in benefits.

The scrounger also failed to tell officials he had earned GBP54,729 between 2006 and 2009 from working for cash whilst sponging of the state.

But he told police he had been involved in a number of car accidents and had received insurance payouts.

The cheat was being paid income support on the basis that he was not working and was a lone parent, while the disability allowance was paid at the higher rate following and accident in January 2005 when a wall fell on his leg, the court was told.

Prosecuting for the Department of Work and Pensions, Rashad Mohammed, said: “It was only as a result of information received by the department that an investigation was started.

“This defendant was observed on CCTV on the streets of Northampton behaving in an aggressive fashion.

“Effectively, he was involved in an affray. He was seen pushing, running and jogging. The aggressive behaviour is caught on CCTV and he was arrested and prosecuted for that matter.

Harris was given a suspended sentence in February 2009 for the cocaine and alcohol fuelled brawl.

Bald headed Harris, who has a string of previous convictions for violence, drugs and dishonesty, turned to drugs when he left behind his old influences.

Defending, Gary Short said: “Unfortunately by the mid 2000s he replaced his old associates with cocaine.”

He was jailed for five years in 1999 for manslaughter.

In mitigation, he said Harris was now working and had been making repayments at a rate of GBP18 a week.

He was sentenced for nine months for the two benefits fraud charges, to run concurrently, and six months for possession of a class A drug in a separate matter

After the case Minister for Welfare Reform, Lord Freud,  said:  “It’s cases like these that show us why welfare reform is needed. We have a duty to the taxpayer and our customers to make sure that these vital benefits only go to those who need them.

“Benefit fraud takes money away from the most vulnerable. It is a crime and we are committed to stopping it by catching criminals at the front line and making sure our reforms make the benefit system less open to abuse.”