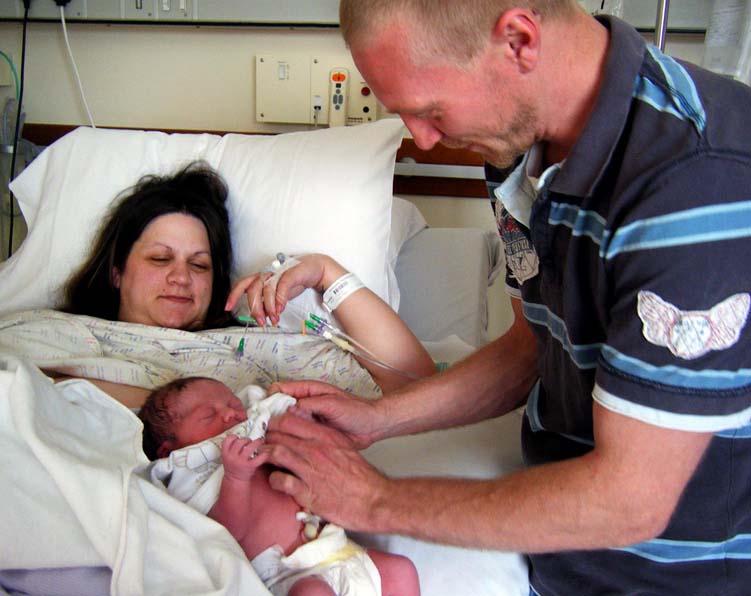 A BRAVE mum  is celebrating the birth of her child after overcoming the heartbreaking agony of SIX miscarriages in five years.

Theresa Wright  and partner Ashley Higton felt destined never to have children after enduring the loss of a baby in 2006, two babies in 2007, two more in 2008 and one in 2009.

But they were overjoyed when son Lewis came along in 2010 and were celebrating again recently with the birth of a second son Harrison.

Harrison was born prematurely at only 31 weeks and the family had to brace themselves for yet another tragedy as he fought for his life in hospital.

But doctors and nurses at Northampton General Hospital helped the tot battle back to health over the course of five weeks and comforted Theresa and HGV driver Ashley through his treatment.

Now at 12 weeks old Harrison is healthy enough to be back home with his mum and dad in Bozeat, Northamptonshire.

Theresa, 29, a full-time mum, said: “I want other people to have some hope, I was the girl who didn’t think she could have a kid and all of a sudden I have one, I know it sounds corny and cliched but dreams can come true.”

Theresa says she didn’t know what to do when Harrison decided to enter the world earlier than planned.

“When we hit 31 weeks and my waters burst we didn’t really know what to expect,” she added.

“I’d lost so many that I could only think of a birth happening or not. I just couldn’t get my head around an in-between option.”

One-year-old Harrison was born with E-Coli in his blood, either due to the clotting disorder or the infection getting in when the protective barrier broke with her waters. He also has an enlarged kidney leaving him with extra medical problem.

“The staff on Gosset ward were just fantastic and helped us through the medical and emotional side,” she added.

It was during Theresa’s pregnancy with Lewis that the couple discovered that she suffers from two separate blood clotting disorders that leave her blood thicker than normal during pregnancy.

This can lead to miscarriages as the phoetus struggles to get enough nutrients through as it grows. Theresa was put on multiple blood thinning drugs in order to help her through the pregnancy.

Lewis was born through a Caesarian, bringing mixed emotions for Theresa.

“I was so excited, but I was so used to losing babies that I was almost sure that someone was going to come along at take him away, or that they were going to tell me I was never pregnant in the first place.

“It was like all my emotions had been bottled up and someone was shaking them, I was happy but scared at the same time.”

Now after having two children, Theresa has organised an online auction in aid of the ward in which Harrison won his battle, which is funded by the hospital for essentials but has to raise funds for extra medical kit.

Theresa said: “Some parents forget about these wonderful people in all the chaos but I don’t want to forget them. I wouldn’t have these two if it wasn’t for them.

“It has given me the opportunity to give something back to them.”